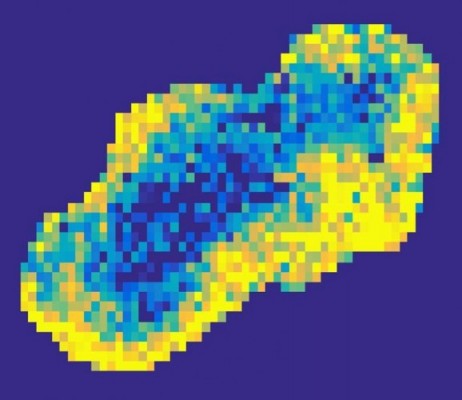 Scientists have developed a new imaging test that could enable doctors to identify more dangerous tumours before they spread around the body – and tailor treatment accordingly.

Teams at The University of Manchester and The Institute of Cancer Research, London describe detailed development of magnetic resonance imaging (MRI) technology to map areas of oxygen deprivation within tumours.

Lack of oxygen, or hypoxia, is often a sign that a cancer is growing aggressively. Hypoxia also stimulates the growth of blood vessels within tumours, which in turn can fuel the spread of cancer cells to other parts of the body.

The new study could also lead to more effective radiotherapy planning to boost the doses of X-rays delivered to dangerous, hypoxic areas within tumours, and new ways of monitoring whether radiotherapy or some drugs are working.

The study, published in the journal Cancer Research today, was funded by a range of organisations including Cancer Research UK, the Engineering and Physical Sciences Research Council and The Wellcome Trust.

Researchers used an emerging technology called oxygen-enhanced MRI to produce maps of hypoxia within tumours grown by implanting cancer cells into mice. The technology is now being further developed through clinical studies of cancer patients.

Oxygen-enhanced MRI works by monitoring alterations in image intensity caused by changes in the concentration of dissolved oxygen in blood plasma and tissue fluid, during inhalation of pure oxygen gas. Some tissues take up the extra oxygen more rapidly than others, which show as more intensely changing regions under the MRI scan.

Ultimately we hope that oxygen-enhanced MRI will not only to identify the most dangerous tumours, but to assist radiotherapy treatment planning and for monitoring treatment response.

They followed a several-step process to prove their MRI technique worked at detecting areas of hypoxia, beginning with the imaging of tumours grown from a cell line of kidney cancer cells known to lead to highly hypoxic tumours.

They then imaged a slower-growing kidney tumour type and tumours grown from a line of bowel cancer cells, to show their technique also worked for less hypoxic tumours.

They cross-referenced their images against samples from the tumours viewed under the microscope to confirm their findings from the scans.

Study co-leader Dr Simon Robinson, Team Leader in Magnetic Resonance at The Institute of Cancer Research, London, said: “Our technique uses MRI technology to detect tumours with areas of oxygen depletion, which tend to be more aggressive and more resistant to radiotherapy and chemotherapy. Our study provides strong pre-clinical evidence to validate the use of oxygen-enhanced MRI to identify, quantify and map tumour hypoxia.

Study co-leader Dr James O’Connor, Group Leader at The University of Manchester, said: “There is currently no validated, affordable and widely available clinical imaging technique that can rapidly assess the distribution of tumour hypoxia. Our findings from studies in mice are already being translated for use on conventional clinical MRI scanners. Ultimately we hope that oxygen-enhanced MRI will not only to identify the most dangerous tumours, but to assist radiotherapy treatment planning and for monitoring treatment response.”

Nell Barrie, senior science information manager at Cancer Research UK, said: “When cancer cells run out of oxygen, they’re more likely to spread from the original tumour, making the disease much harder to treat. Spotting this process in action could help improve treatment, especially for more aggressive tumours, and this early-stage research in mice will help to find new ways to use existing scanning technology to monitor and personalise each patient’s treatment. By combining different techniques such as imaging and radiotherapy, these promising results can be translated into benefits for patients in the years ahead.”