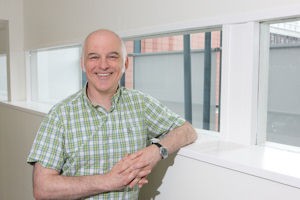 The prospect of gene editing has brought on a controversial debate about the ethics of human modification, prompting much news coverage and commentary. But according to The University of Manchester’s Professor Matthew Cobb, a far more pressing issue is raised by the modification of non-human organisms. BBC Radio Four today broadcasts a documentary by Professor Cobb  called ‘Editing Life’, on the scientific, ethical and ecological implications of the  gene editing technique called  CRISPR. Here he lays out his argument and calls for international consensus on the issue.

“CRISPR is transforming biological and medical research, and has controversial potential for altering humans and the natural world. This new way of editing genes presents the whole of humanity with major challenges.

“The technique enables scientists to precisely alter the genes of any organism – changing just a single letter of a genetic code at will, removing whole genes, or even introducing new stretches of DNA, enabling the organism to produce new proteins, or carry out new tasks.

“Unquestionably, it is going to change our world, even if it is never used on humans, and even if no CRISPR modified organisms are released into the wild. It is going to alter the pace of scientific discovery in the laboratory in unprecedented and unpredictable ways. But the real challenges of CRISPR are not scientific, they are ethical and political.“

I think that a far more pressing and far-reaching issue is raised by CRISPR-modified organisms. This approach clearly has amazing potential, but what organisms should be targeted, and who should decide if and when to release them?

All the focus so far has been on the issues raised by CRISPR modification of humans, which is indeed ethically challenging and potentially life-changing for hundreds of thousands of people around the world.

“But I think that a far more pressing and far-reaching issue is raised by CRISPR-modified organisms. This approach clearly has amazing potential, but what organisms should be targeted, and who should decide if and when to release them?

"We need some kind of international agreement, based on careful study and continual ecological monitoring, coupled with the rights of local communities to veto such projects if they so desire.

“Getting such an international framework will require scientific understanding on the part of the whole population, and political will. Right now, we are a long way from there.”

The  broadcast will be available on Listen Again here: http://www.bbc.co.uk/programmes/b06zr3zj

Professor Cobb is available for interview