On 24 November 2022, presented by Creative Manchester and the John Rylands Research Institute and Library, Professor Jon Savage will be in conversation with Joy Division and New Order band member, Stephen Morris. 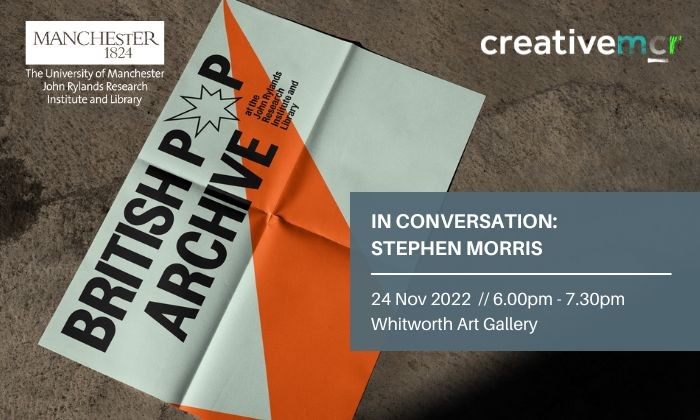 Macclesfield-born, Stephen Morris has often been renowned for his ‘machine-like’ skills as a drummer, beginning his career alongside vocalist Ian Curtis in the band Joy Division. He then went on to be a founding member of New Order, and participated in its spin-off band, Bad Lieutenant, as well as forming a band with his wife, The Other Two. Considered to be a post-punk extraordinaire, Stephen has written two memoirs, Record Play Pause and Fast Forward: Confessions of a Post-Punk Percussionist. Volume 2 of the latter was recently published.

This event, taking place at The Whitworth Art Gallery, sees Stephen in conversation with Professor of Popular Culture (The University of Manchester), Jon Savage, about his career and published works, taking the audience from the Joy Division and New Order years, all the way to the present day. Professor Jon Savage is an English writer, broadcaster, and music journalist, with multiple publications to his name, including his latest book, This Searing Light, The Sun and Everything Else, which provides an oral history of Joy Division. Both Stephen’s and Jon’s books will be available to buy at the event, and a book signing will be held afterwards.

If you would like to see these two industry experts and lovers of music in discussion, you can register to attend this FREE event via Eventbrite.

This event ties into the John Rylands Research Institute and Library’s British Pop Archive, the first specifically designated national popular culture archive in the UK. Based at the John Rylands Research Institute and Library, it aims to celebrate and preserve the records of British popular culture, such as popular music, recognising its pivotal influence on the world stage.