India and Pakistan set to benefit from new autism treatment 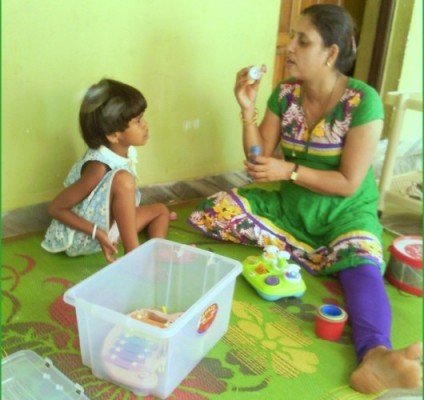 In a world first, clinical researchers from the Universities of Manchester and Liverpool have collaborated with colleagues in south Asia to adapt a parent-led autism therapy and successfully tested it in India and Pakistan, with the aim of improving treatment for an estimated 5 million children in the region with the disorder.

Autism is one of the world’s fastest growing developmental health challenges, with up to 70 million people affected, causing a severe effect on the social development of children.  In developed countries children are able to receive specialist treatment to improve their interaction with their families, but in many lower income countries, this is not available.

The resulting PASS (parent-mediated intervention for autism spectrum disorder in south Asia) programme was taught to non-specialist health workers in Rawalpindi, Pakistan and Goa, India who then worked with parents of the 65 autistic children who were recruited to the trial.

Professor Jonathan Green from The University of Manchester and Professor Atif Rahman from the University of Liverpool, lead authors of the study, said: “We’ve shown that these techniques can help children in the UK, but in south Asia, there are factors such as lack of resources, trained staff, language and cultural differences and poor access to medical centres which means that methods need to be adapted.

“This study is the first to have adapted a treatment so as to allow it to be delivered by non-specialist health workers in south Asian communities. It has been outstandingly successful in showing that such adaptation is both possible and can produce changes that are equal or even better that we achieved in UK.”

This study is the first to have adapted a treatment so as to allow it to be delivered by non-specialist health workers in south Asian communities. It has been outstandingly successful in showing that such adaptation is both possible and can produce changes that are equal or even better that we achieved in UK.

The PASS materials were all presented in the parents’ first language and each period of treatment began with a session on the causes and misconceptions about the condition.

"This pioneering study shows us that it is possible to implement high quality evidence-based intervention in low resource communities, even when there are few or no specialists," said Andy Shih, Autism Speaks vice-president of scientific affairs. "It challenges our notions of best practices and how to deliver effective services to communities that need them the most."  Dr. Shih leads Autism Speaks’ GAPH initiative, which partners with communities in more than 70 countries worldwide to increase awareness and access to autism services.

The study did show a decrease in one measure of attention, suggesting that there are more refinements that need to be made to PASS, but the Manchester researchers are optimistic that it represents a cost-effective way of delivering treatment to children in areas where resources and specialist staff are unlikely to be available.

Professor Vikram Patel from the London School of Hygiene & Tropical Medicine, one of the senior investigators added: “The key to developing mental health services in lower income settings is to develop simple and easily understood treatments that can be carried out even when specialist staff aren’t available.

“This study shows that, for autism, these treatments can make a significant difference for the social development of children who would otherwise likely receive little or no help.”

The paper, ‘Effectiveness of the parent-mediated intervention for children with autism spectrum disorder in south Asia in India and Pakistan (PASS): a randomised controlled trial’, will be published in The Lancet Psychiatry.

India and Pakistan set to benefit from new autism treatment