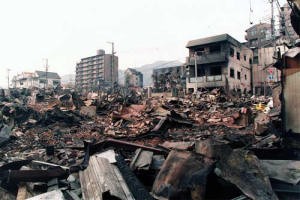 University of Manchester mathematicians have developed the theory for a Harry Potter style ’cloaking’ device which could protect buildings from earthquakes.

Dr William Parnell’s team in the University’s School of Mathematics have been working on the theory of invisibility cloaks which, until recently, have been merely the subject of science fiction.

In recent times, however, scientists have been getting close to achieving ‘cloaking’ in a variety of contexts. The work from the team at Manchester focuses on the theory of cloaking devices which could eventually help to protect buildings and structures from vibrations and natural disasters such as earthquakes.

Writing in the Proceedings of the Royal Society A, Dr Parnell has shown that by cloaking components of structures with pressurised rubber, powerful waves such as those produced by an earthquake would not ‘see’ the building – they would simply pass around the structure and thus prevent serious damage or destruction.  The building, or important components within it, could theoretically be ‘cloaked’.

This ‘invisibility’ could prove to be of great significance in safeguarding key structures such as nuclear power plants, electric pylons and government offices from destruction from natural or terrorist attacks.

This is one of the latest ‘cloaking’ technologies to be developed – a technique which makes an object near-invisible to waves whether they be light, sound or vibration.

The science fiction concept of the Cloak of Invisibility is of course most famously known from the Harry Potter books and films.  But according to scientists, the scientific reality is not far behind.

Initial research into cloaking from light waves began about six years ago, but very little work has been done on waves in solid bodies such as waves produced by earthquakes despite its fundamental importance in a number of areas including the protection of buildings and their components.

Dr Parnell said: “Significant progress has been made, both theoretically and practically in the area of cloaking.

“Five or six years ago scientists started with light waves, and in the last few years we have started to consider other wave-types, most importantly perhaps sound and elastic waves. The real problem with the latter is that it is normally impossible to use naturally available materials as cloaks.

“We showed theoretically that pre-stressing a naturally available material – rubber – leads to a cloaking effect from a specific type of elastic wave. Our team is now working hard on more general theories and to understand how this theory can be realised in practice.

“This research has shown that we really do have the potential to control the direction and speed of elastic waves. This is important because we want to guide such waves in many contexts, especially in nano-applications such as in electronics for example.

“If the theory can be scaled up to larger objects then it could be used to create cloaks to protect buildings and structures, or perhaps more realistically to protect very important specific parts of those structures.”

Dr Parnell is available for interview.