Singing is an activity that raises the spirits and brings people closer together, and University of Manchester student Volunteer of the Year Isla Atay achieved this and more with her unique choir. 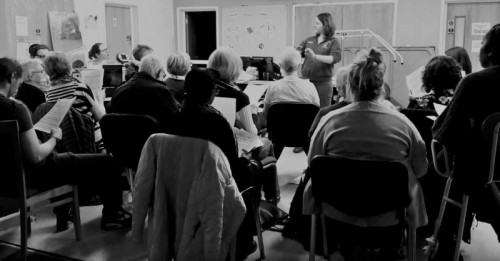 Isla (MusB 2020), coordinated a singing collective bringing together people of all ages within the community, including those with traumatic brain injuries, hearing and visual impairments, behavioural difficulties, autism, Asperger’s and other learning difficulties.

The Gareth Malone-style choir was directed by Isla at the Leonard Cheshire’s Acquired Brain Injury Service, Oakwood, Stockport, after she was recruited by Regional Fundraising Research Coordinator Amy Bradley, a former University of Manchester student who acquired Functional Neurological Disorder in the first year of her Neuroscience PhD.

Most members had never sung before, let alone in a choir, and had wide-ranging needs, but Isla’s quiet, gentle enthusiasm and determination saw them sing in harmony at Arley Hall Chapel as part of Leonard Cheshire’s Christmas Musical Extravaganza.

More importantly, the choir members – who also included staff from Oakwood residential service and members of other local choirs – loved their time together and became firm friends.

“I know what rehabilitation is like. It’s painful, it’s lonely, and you have to keep positive, keep persevering, despite your life having just been dramatically turned upside down,” said Amy. “ Music has kept me going through my period of illness and I wanted to bring people together and help others through difficult times by the creation of a Gareth Malone-style choir. When we first met, Isla’s passion for the project was palpable. Isla has a true talent for bringing people together, a natural maturity and poise, and I nominated her for the award after being staggered by her dedication, maturity and professionalism.”

Isla not only prepared the music and directed rehearsals with a significant and sustained commitment of over four hours a week, she also spoke about the project and Leonard Cheshire on local radio, drove the accompanist and a participant with autism to rehearsals, nominated Leonard Cheshire for her Halls of Residence Charity of the Year and has volunteered to lead the organisation and management of Leonard Cheshire’s Harvest Concert on Thursday, 26 September at Arley Hall Chapel.

Such was Isla’s leadership and professionalism, she has been offered a permanent conducting position with The Stockport Male Voice Choir, who also performed at the Christmas Concert and admired her work on the night.