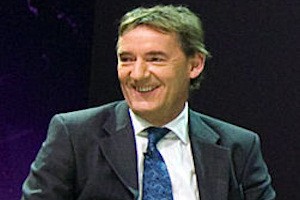 The renowned economist Jim O’Neill has been made Honorary Professor of Economics at The University of Manchester.

The appointment will give economics staff and students an exciting opportunity to discuss issues in economics with the former Goldman Sachs Chief Economist at the University.

Brought up in Gatley, Manchester and a life-long Manchester United fan, he worked for Goldman Sachs Group between 1995 and 2013.

He was Chairman of Goldman Sachs Asset Management and the firm's Chief Economist from 2001 to 2011. Before joining Goldman Sachs, he was Head of Global Research at Swiss Bank Corp.

Professor O’Neill famously coined the term ‘BRIC’ economies in a 2001 paper, predicting that Brazil, Russia, India and China would become future powerhouses of the world economy.

The acronym has been widely used to symbolise a shift in global economic power away from the G7 economies towards the developing world.

He has recently presented four programmes on BBC Radio Four on what he predicts will be the next group of growing economies which he calls the MINT countries - Mexico, Indonesia, Nigeria and Turkey.

Professor O’Neill said: “I feel flattered and honoured, and hope I can give something of value to justify it."

Professor Dame Nancy Rothwell, President and Vice-Chancellor of The University of Manchester, said: “Jim O’Neill is a world renowned economist who, during his career, has done more than most to lead the research and policy agenda on foreign exchange and emerging markets. Staff and students alike will be energised by his position as Honorary Chair in Economics.”

You can listen to MINT: the next economic giants, presented by Jim O’Neill, at http://www.bbc.co.uk/programmes/b03pn2h6/episodes/guide