The Kabul Olympics, the latest poetry collection by John McAuliffe, Professor of Poetry at the Centre for New Writing at The University of Manchester, has been announced as poetry book of the month in The Guardian. 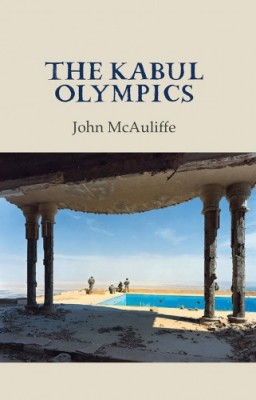 The Kabul Olympics was published by The Gallery Press in April 2020. The poems, many of which are set in Manchester, cleverly combine the impossible and the ordinary, and through the collection we experience real life, every day moments and thoughts that are carefully entwined with historical events and catastrophes.

The stunning title poem, The Kabul Olympics, was written as a tribute to award-winning novelist and MA student at the Centre for New Writing Caroline Chisholm, who sadly died in 2013. Other poems in the collection include City of Trees, set in 22 May 2017 and based around the Manchester arena bombing, Cold War and Blackbird, a poem described as ‘hard to believe it was not written during – and for – lockdown’.

The Guardian review states: “McAuliffe’s gift is to be mindful of elsewheres. He swerves to effect: his shrewd sideways and backwards glances count, pouring light on a subject from several directions simultaneously”.

It goes on to say: “The range and variety of this collection is considerable but McAuliffe is especially good – modest and self-deprecatingly amusing – on the home front. There is a wry poem about a losing battle against weeds, about failing to pitch a tent (Blown Away becomes a metaphor for the difficulty of hanging on in there) and a charming poem about a pair of vases, wedding presents. The poem starts as a still life but is not altogether still. One vase gets broken, while its neglected twin is spotted on a shelf.”