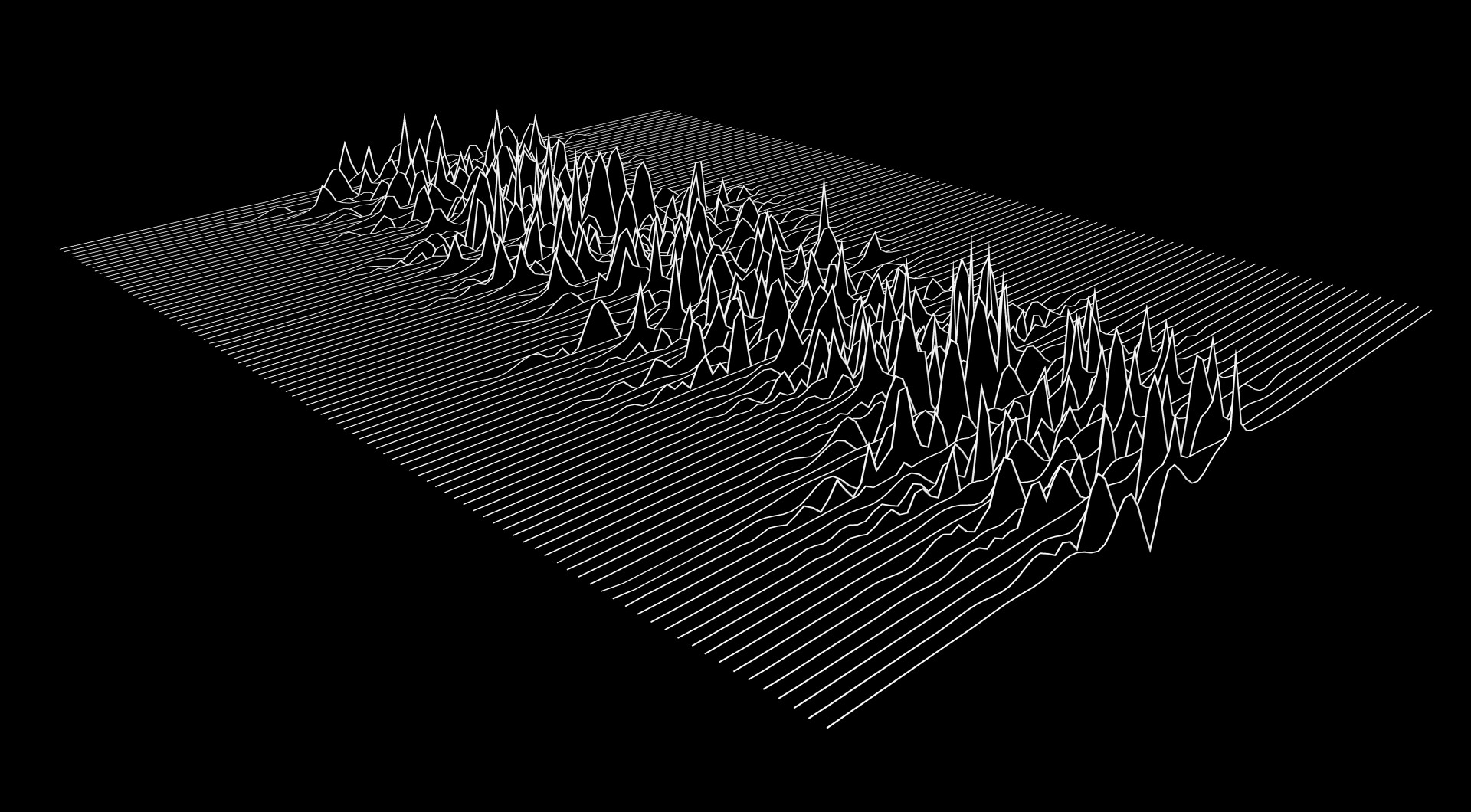 The English rock band Joy Division released their debut studio album “Unknown Pleasures” 40 years ago. The front cover doesn’t feature any words, only a now iconic black and white data graph showing 80 wiggly lines representing a signal from a pulsar in space. To mark the anniversary of the album, we recorded a signal from the same pulsar with a radio telescope in Jodrell Bank Observatory, only 14 miles (23 km) away from Strawberry Studios where the album was recorded.

Peter Saville – graphic designer and co-founder of Factory Records – designed the album cover based on a picture spotted by band member Bernard Sumner in an encyclopaedia. The picture itself can be traced to the work of the postgraduate student Harold Craft, who published the image in his PhD thesis in 1970. 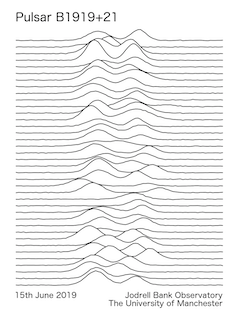 Recording of the same pulsar, exactly 40 years after the album was released. Jodrell Bank Centre for Astrophysics, University of Manchester, Author provided

What we see in this enigmatic image is the signal produced by a pulsar known as B1919+21, the first pulsar ever discovered. A pulsar is formed during the violent death of a star several times more massive than our sun. These stars go out with a bang known as a “supernova explosion”, during which the core of the exploding star is compressed in an almost perfect sphere with a radius of little more than 10 km. What’s formed is called a neutron star.

This stellar remnant, still more massive than our sun, is so extremely dense that the atoms from the original star cannot maintain their structure – they fall apart leaving smaller particles called neutrons, which form a vast ocean beneath the star’s crust. Pulsars are rapidly spinning neutron stars that can be observed from Earth. Thanks to their rotation and a magnetic field which is a trillion times stronger than that of the Earth, the magnetic north and south poles of these super magnets shine like a lighthouse. After having travelled for many hundreds of years, flashes of radiation from B1919+21 reach the Earth every 1.34 seconds.

These flashes from pulsars are especially bright at radio wavelengths, so their signals can be recorded using radio telescopes. A radio telescope works similar to a radio in your car – its antenna focuses radio waves from space onto a point where they can be detected and turned into an electric signal, which can then be converted into sound. We used the Mark II radio telescope of the Jodrell Bank Observatory at the University of Manchester for our recording. 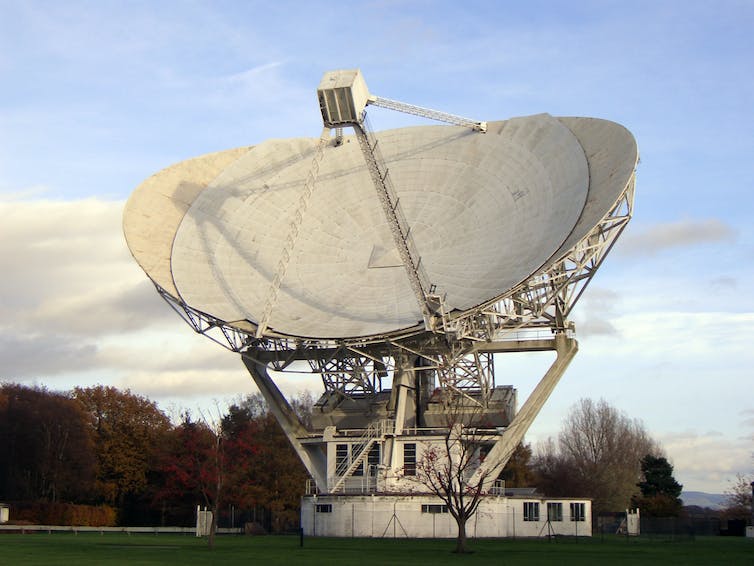 The Mark II telescope at the Jodrell Bank Observatory which made a 47-minute recording of B1919+21. Mike Peel/Jodrell Bank Centre for Astrophysics, University of Manchester, CC BY-SA

The album cover shows 80 wiggly lines which correspond to 80 flashes of radio waves from B1919+21, as the neutron star made 80 turns in 107 seconds. Unlike lighthouses on Earth, each flash is unique. Some flashes are bright – these are denoted in the image by their large spikes – and some are dim.

The shape of the pulses are ever changing. At first glance, they seem irregular and chaotic, but our new imaging reveals some order in the chaos. It’s the same number of pulses from the same pulsar and observed at the same frequency as the diagram from the album cover, but in the image below, a diagonal pattern of stripes emerges. 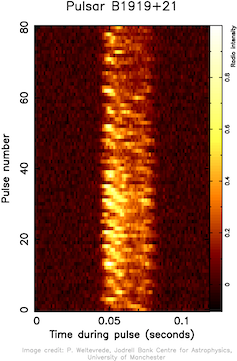 The signal of the same pulsar as featured on the album cover. The lighter the colour is, the more intense the radio waves are. Jodrell Bank Centre for Astrophysics, University of Manchester, Author provided

When the original signal was recorded, it was not known why some pulsars showed this kind of pattern. We now believe that the radio waves are produced by particles which shoot away from the neutron star at nearly the speed of light. The particles are created by electric discharges between the ionised gas surrounding these objects and the surface of the star itself. So, in essence, the radio waves on the album cover and in our new imaging are caused by lightning in outer space, observed many light years away.

A “weather map” can help visualise the vast lightning systems which circulate the magnetic poles of pulsars. The pattern of their lightning changes continuously and the shape of the observed pulses appear somewhat erratic – but observing over a longer period allows a pattern to emerge. 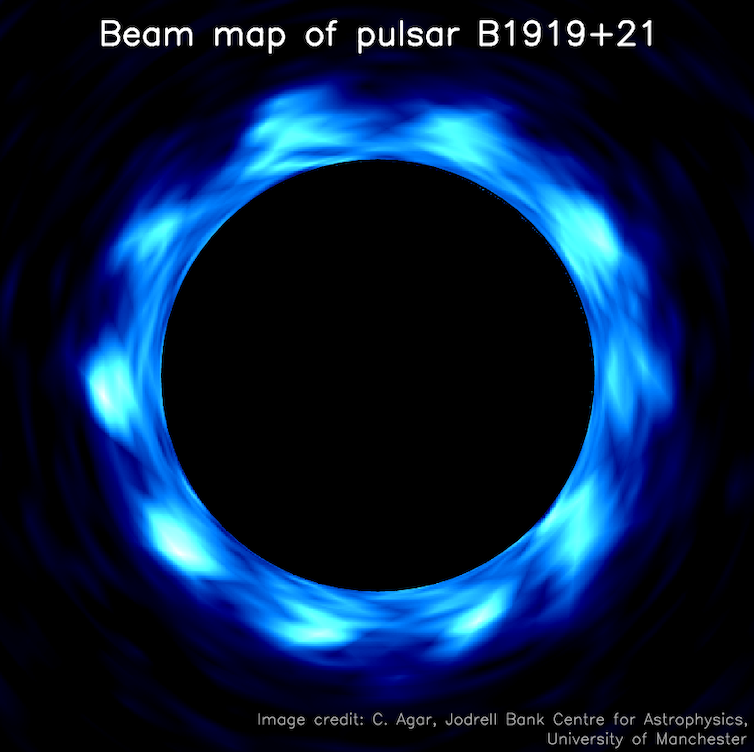 Looking down on the magnetic pole of pulsar B1919+21 which is encircled by lightning. Jodrell Bank Centre for Astrophysics, University of Manchester, Author provided

Four decades after the release of the Unknown Pleasures album we now understand much better what those wiggly lines on its cover mean. But many questions remain about these enigmatic objects, which in many respects are nature’s most extreme creation. Something which remained true for all these years is that pulsar recordings push us to explore the limits of our understanding of the laws of physics.

Patrick Weltevrede, Lecturer In Pulsar Astrophysics, University of Manchester
This article is republished from The Conversation under a Creative Commons license. Read the original article.