An annual cycle of intrigue and speculation, followed by the denouement – at which point the whole knotty process come to a head. Not the sagas of the political party conference season, but the perennially shocking announcement of the Nobel Laureate in Literature. The same questions often follow. Who is that? From where? For what? Last year’s decision, honouring Bob Dylan, generated more headlines than ever – and a different question. What is “literature”, asked many commentators, if a songwriter wins?

It drew further attention to the workings of the Swedish Academy. Its 16 members draw up a shortlist from the longlist nominated by previous Nobel laureates, experts in the field and national writers’ associations. The somewhat random process is further complicated by the criterion that the winner should be “the most outstanding work in an ideal direction”. How do these 16 academicians respond to work in so many genres, in so many languages, in any meaningful way? And what is their ideal direction?

This year’s choice, Kazuo Ishiguro, like Patrick Modiano and Dylan, has written for music, but is best known for his two novels which have been turned into movies: The Remains of the Day (1989), which won the Booker Prize, and Never Let Me Go (2005).

Following Dylan’s success, and the success of the oral historian Svetlana Alexievich, this year’s announcement means that the prize has returned to a more conventional writer, a novelist who is easily read alongside predecessors such as VS Naipaul, Doris Lessing, Herta Muller and Orhan Pamuk.

Like Naipaul and Lessing, Ishiguro is a naturalised British citizen: born in Nagasaki, Japan, his family moved to the UK when he was a child. He studied at Kent and then took an MA in Creative Writing at UEA, where his London-based tutor Angela Carter, herself shortly returned from time spent living in Japan, was a powerful example of the independent literary life.

When Ishiguro first began to publish in the 1980s he was identified with the “Granta Generation” of Martin Amis, Salman Rushdie, Graham Swift and Julian Barnes. The books treated the fixed manners and social norms of British and Japanese society with coolly understated prose, generating pathos and tragedy from the ways in which their subjects’ good manners and expectations were overwhelmed by events.

The success of The Remains of the Day seems to have given Ishiguro pause and his fourth novel, The Unconsoled, published in 1995, was more abstract, featuring an unnamed protagonist, a pianist, whose dreamy, self-questioning wanderings invited comparisons with Kafka and also put clear water between Ishiguro and his more social realist contemporaries. Like Lessing before him – and like Jeanette Winterson and other fabulists of his own generation – Ishiguru’s work has increasingly veered from the recognisable worlds of his childhood to more fantastical realms. 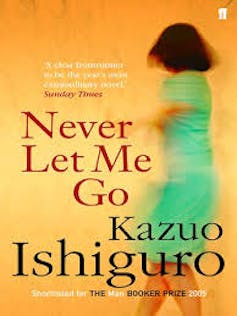 Never Let Me Go typically confused reviewers who sought to identify its genre: its story of clones raised for organ donation was read as horror, science fiction and parable (it was shortlisted for the Booker Prize and won the Arthur C. Clarke Award), although its tender illustration of adolescent uncertainty and powerlessness was what made it both a critical and popular favourite.

Continuing his experiments in genre, his most recent novel, The Buried Giant (2015), is a fantastical account of Arthurian Britain, whose travelling protagonists must negotiate tribal politics and feudal hierarchies. It makes for an uncomfortable perspective on the Brexit referendum – and the rise of anti-immigrant rhetoric in the UK – which also drew Ishiguro into an unusually political intervention, calling for a second referendum in an essay written for the Financial Times.

The essay is, as readers might expect, carefully attuned to the ways in which societies can be suddenly transformed, when yesterday’s norms no longer apply and sections of a population suddenly find themselves stranded under a new dispensation. Given that the Nobel academicians often read poetry and fiction for its political idealism as much as for its stylistic innovation and integrity, what Ishiguro wrote in that essay may well be the “ideal direction” they use as a compass when they look for what is best in contemporary literature.

The Britain I know – and deeply love – is a decent, fair-minded place, readily compassionate to outsiders in need, resistant to hate-stoking agitators from whatever political extreme – just as it was in the first half of the 20th century when fascism rampaged across Europe. If that view has now become outdated, if it has become naive, if today’s Britain is one I should no longer recognise as the one I grew up in, then let me at least hear the bad news loud and clear. Let us find out what we’re dealing with. Let us find out who we are.

Ishiguro is an interesting and – in his experiments with genre – original novelist. He is also a relatively young recipient of the Nobel Prize. Winning the Booker propelled his writing in a new direction, so this award may likewise encourage what is most ambitious about his work. This time next year, when the bookies start quoting odds on his contemporaries, he may well have the look of a classic choice.