An alumna of The University of Manchester’s School of Arts, Languages and Cultures has been given an Outstanding Alumni Award for her disability advocacy work. 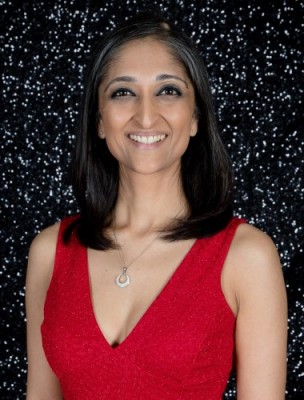 The Outstanding Alumni Awards are presented annually to alumni of The University for their services to the University and wider community or for their personal or humanitarian achievements. This year, Trishna Bharadia was recognised for being a chronic illness and disability advocate, who has been playing a role in advising industry, the third sector and the NHS on how to improve the support, services and information available to patients during their healthcare journeys.

Trishna was diagnosed with multiple sclerosis in 2008, aged 28, five years after graduating with a degree in European Studies and Spanish, from which she launched her career as a translator, analyst and team leader for business information services, before turning her hand to advocacy work.

The award-winning chronic illness and disability advocate has been an ambassador for MS Society UK, ADD international and ParaDance UK, and has been on the judging panel for high-profile events such as the MS Society Awards and QuDoS Awards in MS. She adds her Outstanding Alumni award to a collection that includes a UK Prime Minister’s Office Points of Light award for her services to people with MS and chronic illness, her Woman of the Year Asian Achiever award and her EyeforPharma European Patient Advocate award.

Trishna has been invited to speak at 10 Downing Street and the Houses of Parliament, and appeared in a special edition of BBC1’s Strictly Come Dancing – The People’s Strictly for Comic Relief, while she is a formidable public speaker and communicator, giving her cause a platform on radio, television and in print and online.

Trishna is being commended alongside fellow alumni Arnold Ekpe of the Faculty of Science and Engineering and Dr Robina Shah of the Faculty of Biology, Medicine and Health, while a posthumous award was given to Rebecca Dykes, also of the Faculty of Humanities, who was recognised for her humanitarian work. Rebecca lost her life working for the British Embassy in Beirut, Lebanon, in December 2017 when she was just 30.