Double honour for Professor Milanovic
Jeremy Corbyn speaks at launch of clothing poverty campaign
New Article on The interplay of entrepreneurial ecosystems and global value chains
New agreement on detection and diagnosis of health conditions across Greater Manchester
Prof Frank Mort reflects on the death of our ‘Queen of union’
Guilt by Association, A Black History Month Event
Newsroom

Third year Sociology students were recently visited by renowned DJ, radio presenter and broadcaster, Graeme Park, to debate the impact of the pandemic on the Creative and Cultural Economies. 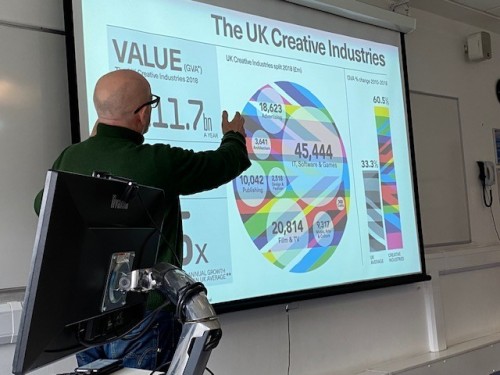 Graeme has worked in the cultural and creative economy for nearly 40 years and is perhaps best known for being a regular DJ at Manchester’s famous Haçienda club in the late 1980s and 90s.

With the club, once on Whitworth Street, long gone, the Haçienda has been reborn into Haçienda Classical, a dance music festival organised by Graeme along with New Order’s Peter Hook, which unites DJs with Manchester’s Camerata Orchestra.

Graeme is also a Senior Lecturer in Creative Futures at Wrexham-Glyndwr University, he has recently been involved in a research project ‘Rave Renaissance’, exploring the revival of rave with Dr Helen Holmes (Sociology) and Prof Nick Crossley (Sociology).

Graeme gave a guest lecture on Dr Holmes’ course ‘Ordinary Economies: Alternative Economies’, followed by a discussion on how the Cultural and Creative Economy has changed over the last 30 years and the barriers to accessing employment within the sector.

The latter part of the lecture focused on ageism within the dance music industry, including a trailer for a documentary Graeme is producing with documentary director, Glenn Hanstock, called ‘Embrace The New’. Finally, Graeme turned to illuminating the impact of Covid-19 on the sector and how those working in it are struggling to stay in business.