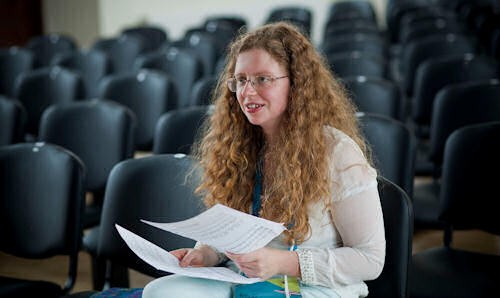 Former Manchester student Emma Wilde is set to have her new composition performed in the London Sinfonietta's Beacons event at the Queen Elizabeth Hall on 16 May.

Emma studied composition with Camden Reeves, working through the MusB programme and both the MusM and PhD programmes in Composition.

Her new piece for the Sinfonietta will be programmed alongside works by Unsuk Chin, Rebecca Saunders and a new commission from Charlotte Bray.

We caught up with her to find out more.

How did the commission come about?

"I was asked to compose the work in memory of Robert Clarke, who sadly passed away earlier in the year.

"Robert was a great supporter of younger, emerging composers, so the ensemble thought it would be fitting to commission someone of that mould."

Will your new piece for the Sinfonietta owe much to the work you developed at Manchester?

"Certain areas of my PhD research, for example the creation of highly contrasting materials and use of limited pitch collections, have crept into the work, but there have been new influences as well. For the first time I have used the structure of a poem, Amor Constante Más Allá De La Muerte by Francisco De Quevedo, to inform the structure of the piece.

"I have also recently moved to Mexico and this has no doubt had some influence on my compositional processes."

What is the most exciting thing about this new project?

"It is exciting to have my music performed and supported by such an institution that has had so much importance for contemporary music throughout the years in the UK.

"It is also exciting to see my music programmed alongside such renowned composers as Rebecca Saunders and Unsuk Chin."

Finally, when will you first get to hear the Sinfonietta play your piece?

"The world premiere will be on 16 May as part of the Beacons concert in the Queen Elizabeth Hall, Southbank Centre.

"Unfortunately, I am currently based in Mexico and am unable to travel to the performance, so am hoping to hear it by technological means!"