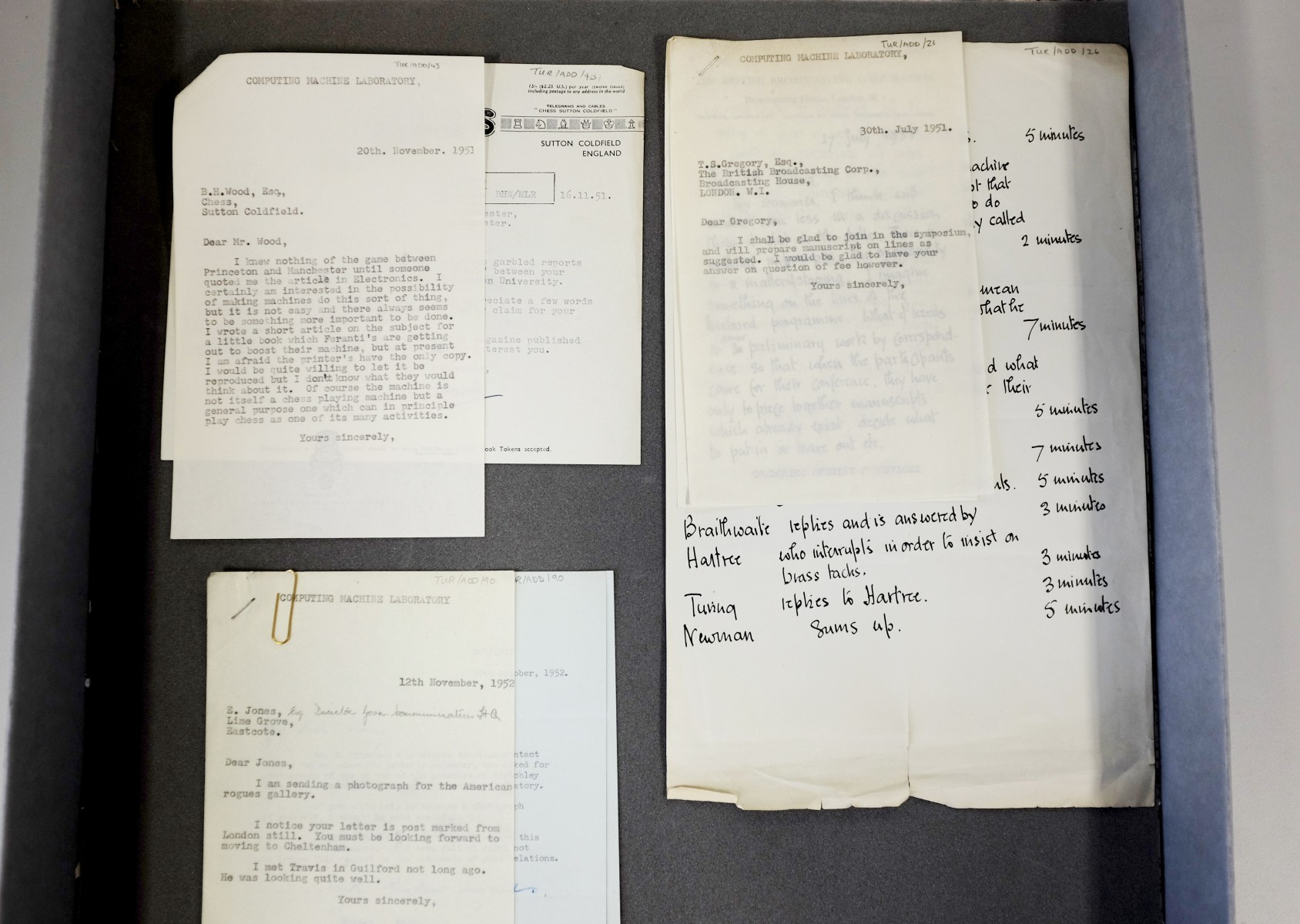 A lost and unique collection of letters and correspondence from the late Alan Turing has been found in an old filing cabinet in a storeroom at the University of Manchester.

The file’s content, which potentially hasn’t seen the light of day for at least 30 years, dates from early 1949 until Turing’s death in June 1954.

Altogether there are 148 documents, including a letter from GCHQ, a handwritten draft BBC radio programme about Artificial Intelligence (AI) and offers to lecture from some of America’s most famous universities, such as Massachusetts Institute of Technology (MIT).

The file contains very little about Turing’s personal life and the events around his well-documented conviction for an illegal sex act in 1952, enforced hormone treatment and tragic suicide in 1954. Plus, Turing’s war work on Enigma was still top secret at this time so, apart from a single letter from the director of GCHQ about Bletchley Park, it is not mentioned in the correspondence.

But the letters do give a unique glimpse into his every day working life at the time of these events. Plus, some documents also give a brief insight into some of his more forthright personal opinions. For example, his response to a conference invitation to the US in April 1953 is simply, “I would not like the journey, and I detest America”.

The documents were found by Professor Jim Miles of the School of Computer Science, who is also the School’s history co-ordinator. Prof Miles was reorganising the storeroom when he came across an ordinary looking red paper file which had the words Alan Turing written on it.

When I first found it I initially thought, ‘that can’t be what I think it is’, but a quick inspection showed it was, a file of old letters and correspondence, by Alan Turing. I was astonished such a thing had remained hidden out of sight for so long.

He says: “When I first found it I initially thought, ‘that can’t be what I think it is’, but a quick inspection showed it was, a file of old letters and correspondence, by Alan Turing. I was astonished such a thing had remained hidden out of sight for so long. No one who now works in the School or at the University knew they even existed. It really was an exciting find and it is mystery as to why they had been filed away.”

The collection was initially found in May this year, but has now been sorted, catalogued and stored at the University’s Library by Archivist, James Peters, and is available for researchers.

James said: “This is a truly unique find. Archive material relating to Turing is extremely scarce, so having some of his academic correspondence is a welcome and important addition to our collection.

“There is very little in the way of personal correspondence, and no letters from Turing family members. But this still gives us an extremely interesting account and insight into his working practices and academic life whilst he was at the University of Manchester.”

A lot of the letters focus on Turing’s research and his forward, ground-breaking thinking in areas such as AI, computing and mathematics.

James added: “The letters mostly confirm what is already known about Turing’s work at Manchester, but they do add an extra dimension to our understanding of the man himself and his research. As there is so little actual archive on this period of his life, this is a very important find in that context. There really is nothing else like it.”