Lucy, 9, fronts global fight to save frog from extinction 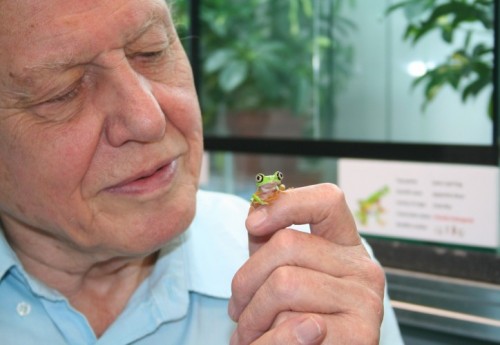 A nine-year-old schoolgirl is to front a global educational campaign, launched today, to save one the world’s rarest frogs.

Lucy Marland joined forces with The University of Manchester after coming face to face with a Lemur Leaf Frog, kept at Manchester Museum and one of only a few hundred left anywhere in the world.

The campaign, called Learning with Lucy, aims to educate primary age school children in the UK and in the Guayacan region of Costa Rica, where the frog still survives, about the amphibian and its threatened rainforest habitat.

The frog is also one of the world’s most unusual: by day it has silver eyes and a lime green body, but by night, its appearance transforms into chocolate brown eyes and skin. It also never leaves the trees.

Lucy said: "I am so excited to be part of this project because I love frogs and I am very worried about the Lemur Leaf Frog and its survival. I want everyone to know that with a little effort, we can make a difference for these frogs and other endangered animals."

Andrew Gray, curator of herpetology at Manchester Museum, oversees the amphibian collection in its vivarium and leads the Lemur Leaf Frog Conservation Project.

Backing the campaign, Sir David said: “I wholeheartedly support Manchester Museum's campaign, headed by Lucy Marland, to save the Lemur Leaf Frog. It is after all, one of the world's most unusual and rarest amphibians – and it is in real trouble."

I wholeheartedly support Manchester Museum's campaign, headed by Lucy Marland, to save the Lemur Leaf Frog. It is after all, one of the world's most unusual and rarest amphibians – and it is in real trouble.

Mr Gray said: “One major aim is to teach Guayacan children about protecting their own threatened natural resources and the biodiversity and natural history of their country: Costa Rica.

“It’s surprising how little they know; educational resources, a booklet and field trips will play a part in correcting that, as well as three films we have had made for the project.”

An education pack for primary school children and part-funded placements in Costa Rica for Biological Sciences undergraduates are also part of the mix.

He added: “It was incredible to witness the instant effect this tiny amphibian had on Lucy.

“She decided there and then that one day she would be a zoologist and once home, with the help of her mother Marie, she wrote to the University and it all happened from there.

“It all starts with you, our theme, is about each and every one of us making an impact on the world around us.
“That someone so young can fully grasp that concept, immediately take it on board, and actively start doing something about it is extra special.”

Anna Kell, a University of Manchester undergraduate studying biology, went on a field course Costa Rica this year to conduct research on hummingbirds.

She said: “It was a wonderful opportunity to go to Costa Rica on a field course to explore and study an ecosystem that I would never get the chance to otherwise.

“It’s such an amazing experience to be thrown into conducting your own research on something you’re passionate about in a new and beautiful environment.”

Professor Amanda Bamford, Associate Dean for Social Responsibility said: “That this Manchester university project also supports environmental education in primary schools in Costa Rica, where these frogs occur in the wild, not only reflects a genuine commitment to helping conserve endangered species but also provides us with a wonderful opportunity for our undergraduates to exercise their global citizenship.”

NOTES FOR EDITORS
The ambassador for Costa Rica, Enrique Castillo, will be visiting Manchester Museum on January 27 to meet staff, academics, and visitors to celebrate the project, which is called ‘Learning with Lucy’.

Manchester museum has the largest and most important collection of live Costa Rican frogs in the world outside Costa Rica.

The museum’s vivarium, where rare frogs are maintained an exhibited, is open to the public 7 days a week and admission is free. The vivarium is actively engaged in the international conservation of amphibians and the Lemur frog Project, conserving rare amphibians in  captivity and supporting them in the wild through research, engagement and public engagement.

Images are available. Please use the use the credit: Copyright Andrew Gray/lemurfrog.org/Manchester Museum if using the David Attenborough image

The videos are available at https://lemurfrog.org/education/learn-with-lucy/

Lucy, 9, fronts global fight to save frog from extinction