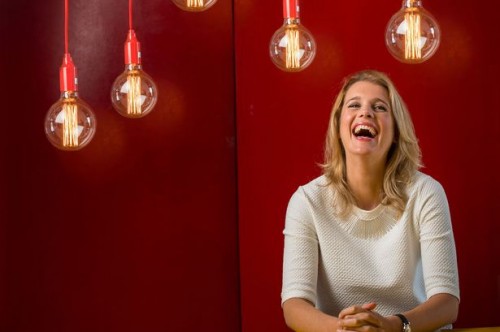 Professor of Radio Frequency Engineering Danielle George has spoken about the value of citizen science, and the importance of raising public awareness of the positive impact engineering has on the world, at the annual Cockcroft Rutherford lecture for friends and alumni of The University of Manchester.

The lecture is held every year in honour of two of the University’s 25 Nobel Prize winners, Sir John Cockcroft – who was instrumental in the development of nuclear power - and Lord Ernest Rutherford, whose work led to the first splitting of the atom. Speakers at the prestigious talk in previous years have included Professor Brian Cox, Sir Andre Geim and Professor Dame Sally Davies.

Professor George was recently described by the Guardian as one of the UK’s heroes in science. She delivered the hugely prestigious Royal Institution 2014 Christmas Lecture, and more recently presented at the acclaimed TEDGlobal Conference. She is involved in the Square Kilometre Array (SKA), the world's largest ever radio telescope, which is made up of an array of thousands of dishes spread out in remote areas across the planet and headquartered at The University of Manchester’s Jodrell Bank.

Professor George is also the UK lead for amplifiers for the Atacama Large Millimeter Array telescope, and has also worked with NASA and the European Space Agency on the development of instrumentation for researchers exploring the Big Bang.

Speaking to the 800-strong audience at the lecture, which was chaired by President and Vice Chancellor Professor Dame Nancy Rothwell, she said:

“It’s such an honour to give this lecture, especially as Manchester is this year’s European City of Science. I believe we are all born scientists or engineers, because we all ask the fundamental questions of science and engineering - ‘why?’ and ‘how?’ It’s important that children continue to be inspired enough to ask these questions in order to solve the biggest challenges that the world faces in the 21st century.”

She also spoke about the possibility of delivering a successful engineering project by crowdfunding, or of citizen data scientists helping astrophysicists to study the dawn of time. “In this era of Big Data and Smart Machines, we need help to solve the huge technical challenges we face in the next generation of instrumentation. We need to embrace technology, and inspire the people most proficient at understanding and developing it.”

Professor George concluded her speech by encouraging everyone to play their part in science and inviting the audience members to build a robot for her Robot Orchestra project, which aims to create an environmentally-friendly ensemble made up of ‘robots’ performing with instruments and recycled materials. The public is being encouraged to get involved by salvaging and donating unused technology, building robots and instruments, and writing computer code. Rehearsals are currently taking place, and the orchestra will give its full debut performance in July during the Euroscience Open Forum - Europe’s largest science conference.

Graphene NOWNANO CDT hosts open day 2021
Making the right decisions for children growing up in long-term foster-care
Researchers publish journal article on ‘Effects of Digital Technologies on Older People’s Access to Health and Social Care’
Rising Fintech Founder shares his experiences from student to CEO
Circular Economy Systems: NICER Programme Webinar
An investigation of academic perspectives on the 'circular economy' using text mining and a Delphi study
Some modules are disabled because cookies are declined. Accept cookies to experience the full functionality of this page.
ACCEPT COOKIES
We use cookies to optimize the website, no personal information is stored. Learn more
DECLINE COOKIES ACCEPT COOKIES