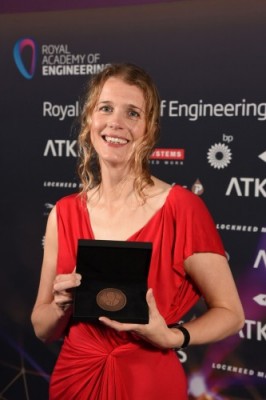 Danielle George, Professor of Microwave Communication Engineering at The University of Manchester, has been presented with the 2016 Rooke Award by the Royal Academy of Engineering for her efforts to promote the subject to the public. Her work on exciting projects such as the upcoming Robot Orchestra has been recognised by the Academy at an awards dinner in the Tower of London.

The Rooke Award is awarded to an individual, small team or organisation who has contributed to the Academy's aims and work through their initiative in promoting engineering to the public. It has previously been won by people including TV presenters Johnny Ball, Adam Hart-Davis and Kate Bellingham, as well as Professor John Burland, whose work helped to stabilise the Leaning Tower of Pisa.

The award is named in honour of the late Sir Denis Rooke, a former President of the Academy and one of the UK's most distinguished engineers. As Chairman of British Gas, he built the UK's distribution network and united the gas industry, making domestic gas a cheap and convenient fuel source for millions of people. He later became Chancellor of Loughborough University, and served on many national advisory committees on both energy policy and education.

Danielle is eager to make people excited about science and engineering, and to spread the message that we are all engineers at heart, which she does through a combination of interactive lectures and innovative citizen science experiments. She has been invited to present this engaging combination at many high-profile occasions including the 2014 Royal Institution Christmas Lecture broadcast on BBC Four, TEDGlobal and Manchester’s recent TEDx event.

Her most recent project is the crowd-sourcing of a robot orchestra, built from recycled electronics and junk donated by an eclectic mix of organisations including the Women’s Institute, the National Trust and Transport for Greater Manchester. She is encouraging people to get involved through a citizens’ engineering project with primary and secondary school groups and individuals, mainly around Manchester but as far away as London. Each team will make their own robot to play a particular part in the orchestra.

Engineering company Siemens is building a special robot conductor to keep the other robots to time, and Professor George is also working closely with the Halle Orchestra, which has composed a special piece of music for the orchestra launch and will provide eight members of the orchestra to perform the music live alongside the robots. It will go on tour later this year, following its debut in Manchester in July as part of the European City of Science celebrations.

“I am delighted to win this award, as it is a great recognition of the work we are doing at the University to make people excited about science and engineering. With the Robot Orchestra, we are effectively trying to crowd-source an engineering project - it’s definitely taking me out of my comfort zone. However, that’s a good thing, because that’s when we’re at our most creative! I want the project to show how everyone can discover the engineer inside themselves - and build an amazing machine from their imagination.”