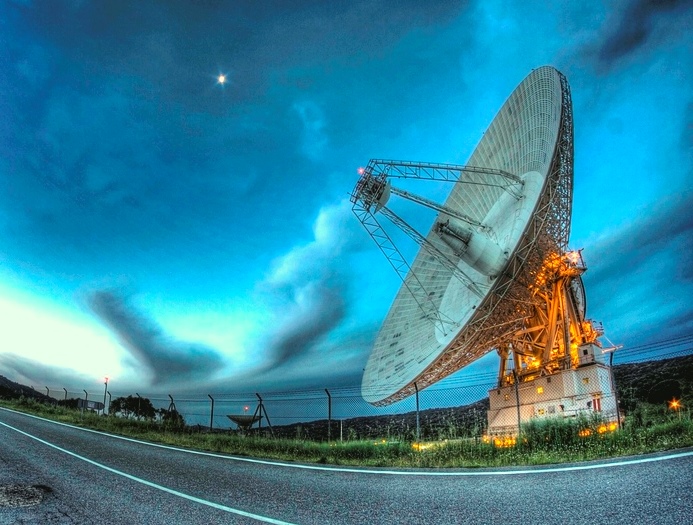 A team of astronomers from The University of Manchester, together with collaborators from the Centro de Astrobiología and the Deep Space Network, Spain and the Universidad Nacional Autónoma de México, have detected a rare gas 4000 light years away from Earth. The discovery, made using the largest antenna of NASA's Madrid Deep Space Communication Complex (70 metres in diameter), could help scientists to understand more about the history of this important element.

Helium-3 is a gas that has the potential to be used as a fuel in nuclear fusion power plants in the future, and is crucial for use in cryogenics and medical imaging techniques. There is very little of it available on Earth, so most of it is manufactured in nuclear laboratories at great cost. There are thought to be significant supplies on the Moon, and several governments around the world have signalled their intention to go to there to mine it, which could trigger a new space race.

The gas is produced in low mass stars, less than twice the mass of the Sun, which expel most of their matter into space at the end of their lives, forming a planetary nebula (the Sun will do this in about 5 billion years). This should begin to slowly enrich the Universe in helium-3. Of all elements produced in stars (and that ranges from carbon to uranium), helium-3 is the one that takes longest to reach space.

The team leader, Lizette Guzman-Ramirez, started to research Helium-3 as a PhD student at The University of Manchester, before moving to the European Southern Observatory in Chile. She teamed up with Albert Zijlstra and Malcolm Gray from The University of Manchester and colleagues from Spain and Mexico to search for helium-3 in a planetary nebula 4000 light years away from Earth, and to measure how much is produced in its star. The team detected an unexpectedly high amount of the gas, almost 500 times higher than its relative percentage on Earth, and several times higher than any of the team’s models had predicted.

“Helium-3 is a late addition to the Universe, made in stars like the Sun. We have now detected it around the kind of stars which create it, which means that we are getting a bit closer to understanding the history of this poorly known but important element.”

The detection proves that Helium-3 is produced at the centre of stars like the Sun, and is ejected into space at the end of the life of the star – however, the large amount that was found remains unexplained. The star may have been more productive than models assume, but if this is true for all stars there would be much more Helium-3 currently in the Universe than is the case.

Further research on other planetary nebulae will be needed, but as the emission is extremely weak and hard to detect, the Square Kilometre Array will be needed to do the research - headquartered at Jodrell Bank, this international project is currently in development in Australia and South Africa, and will be the world's largest and most sensitive radio telescope.

The team’s research is published in the Monthly Notices of the Royal Astronomical Society, Letters.

Schools Poetry Competition Winners Announced
The University of Manchester’s Virtual Concert Series launched
University professors publish 'The New Architecture of Science'
COVID continues to hit North hard as analysis indicates lockdown varied in its effectiveness across the country
Multimillion pound scheme could make early diagnosis of liver disease a reality
Cold War antiseptic has potential in fight against drug-resistant germs and viruses
Some modules are disabled because cookies are declined. Accept cookies to experience the full functionality of this page.
ACCEPT COOKIES
We use cookies to optimize the website, no personal information is stored. Learn more
DECLINE COOKIES ACCEPT COOKIES