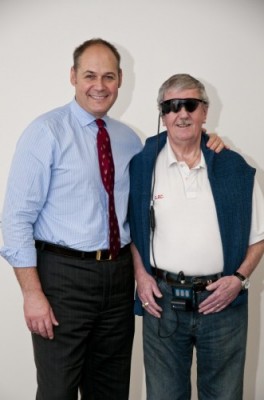 Five blind Manchester patients will be among the first in the country to receive revolutionary bionic eye implants funded by the NHS.

NHS England will provide funding for further testing of the Argus II, also known as the Bionic Eye, for ten patients with Retinitis Pigmentosa (RP), an inherited disease that causes blindness.

Five of these procedures will take place at the Manchester Royal Eye Hospital (MREH) from 2017, with the other half at Moorfields Eye Hospital in London.

Surgeons at Manchester and Moorfields made history by delivering the world’s first trial of the Argus II bionic eye implants in RP . MREH surgeons also performed the first ever bionic eye implant on a patient with age-related macular degeneration (AMD) in 2015.

NHS England will fund this through its Commissioning through Evaluation (CtE) scheme, designed to gather vital evidence for treatments that show significant promise for the future. NHS England will assess how the Bionic Eye helps patients function with everyday tasks.

One of the first implanting surgeons was Professor Paulo Stanga from Manchester Royal Eye Hospital, University of Manchester and Manchester Vision Regeneration (MVR) Lab at NIHR/Wellcome Trust Manchester Clinical Research Facility. Prof. Stanga, who has played a crucial role bringing the bionic eye to patients on the NHS, says: “I’m delighted that our pioneering research has provided the evidence to support NHS England’s decision to fund the bionic eye for the first time for patients. It surpassed all of our expectations when we realised that one of the RP patients in Manchester using the bionic eye could identify large letters for the first time in his adult life.”

This news comes just weeks after the Department of Health announced a £12.5m investment into Manchester’s clinical research facilities.  The NIHR/Wellcome Trust Manchester Clinical Research Facility has provided the dedicated space, specialist staff and equipment to support the Bionic Eye studies, which demonstrated that the bionic eye device restores a degree of visual function to patients who have suffered complete vision loss due to RP.

“Our work also has the potential to improve the lives of thousands of other patients with the more common condition, age-related macular degeneration – Manchester is currently the only site in the world to be trialing the bionic eye in AMD”, added Prof. Stanga.

Patients using the system, developed by American company Second Sight Medical Products, are given an implant into their retina and a camera mounted on a pair of glasses sends wireless signals direct to the nerves which control sight. The signals are then ‘decoded’ by the brain as flashes of light.

Grandfather-of-five from Lancashire, Keith Hayman, 68, was one of three people who had been fitted with the bionic eye at Manchester Eye Hospital by Professor Stanga during a trial for Retinitis Pigmentosa in 2009. He has been blind for 25 years having been diagnosed in his 20s while working as a butcher and was forced to give up work in 1981 when he was registered blind. He says; "Having spent half my life in darkness, I can now tell when my grandchildren run towards me and make out lights twinkling on Christmas trees. When I used to go to the pub, I would be talking to a friend, who might have walked off and I couldn't tell and kept talking to myself. This doesn't happen anymore because I can tell when they have gone. These little things make all the difference to me."

Grégoire Cosendai, VP of Europe for Second Sight Medical Products Inc, said: “Second Sight wishes to congratulate NHS England for this decision to make this truly revolutionary and life-changing technology available for patients. Argus II makes a real difference to blind people. It may be, for some patients, the difference between staying at home alone, or being able to find your way outside. Now this treatment is to be offered free of charge to blind patients in the UK. This is a major victory for blind people in the UK who have supported us in our six-year mission to fund Argus II in England.”

Dr Jonathan Fielden, Director of Specialised Commissioning and Deputy National Medical Director, NHS England said: “This highly innovative NHS-funded procedure shows real promise and could change lives. The NHS has given the world medical innovations ranging from modern cataract surgery, new vaccines and hip replacements. Now once again the NHS is at the forefront of harnessing ground-breaking science for the benefit patients in this country."

Procedures will take place during 2017 and patients will then be monitored for a period of one year, during which they will be assessed on how the implants improve their everyday lives.