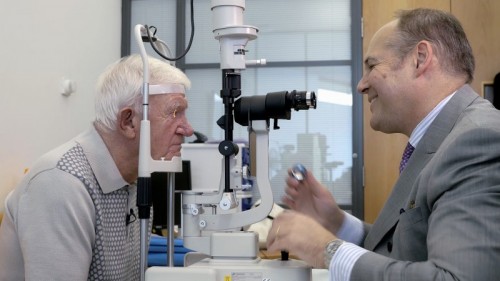 The world’s first implant of a bionic eye has been carried out by a University of Manchester academic.

Professor Paulo Stanga led the four hour operation on pensioner Ray Flynn at the Manchester Royal Eye Hospital which implanted a device to convert video images from a miniature camera installed in his glasses.

Mr Flynn, 80, has age related macular degeneration, a condition which affects over 500,000 people in the UK. The condition is not painful but it means that central vision is impaired resulting in people being unable to read or drive and having difficulty recognising faces.

For Mr Flynn this meant he was unable to watch his beloved Manchester United on television or do gardening. He was fitted with the device in June which was activated on 1 July and Professor Stanga is delighted with the results.

“Mr Flynn’s progress is truly remarkable,” said Professor Stanga. “He is seeing the outline of people and objects very effectively.

“The dry form of AMD is a common, but untreatable condition. In the western world, it is the leading cause of sight loss. Unfortunately, with an ageing population, it is becoming more common."

The technology works by turning the images captured by the camera into small electrical pulses.  These are transmitted wirelessly to electrodes on the retina surface where they stimulate the remaining cells and replicate the patterns of light for the brain.  Over time Mr Flynn will learn to interpret these patterns and regain vision.

“This technology is revolutionary and changes patients’ lives – restoring some functional vision and helping them to live more independently,” said Professor Stanga, who works in the University’s Institute of Human Development as Professor of Ophthalmology & Retinal Regeneration.

“As far as I am concerned, the first results of the trial are a total success, and I look forward to treating more dry AMD patients.”

For information on opportunities to undertake further study or research in this field, please visit the Faculty of Medical and Human Sciences website.