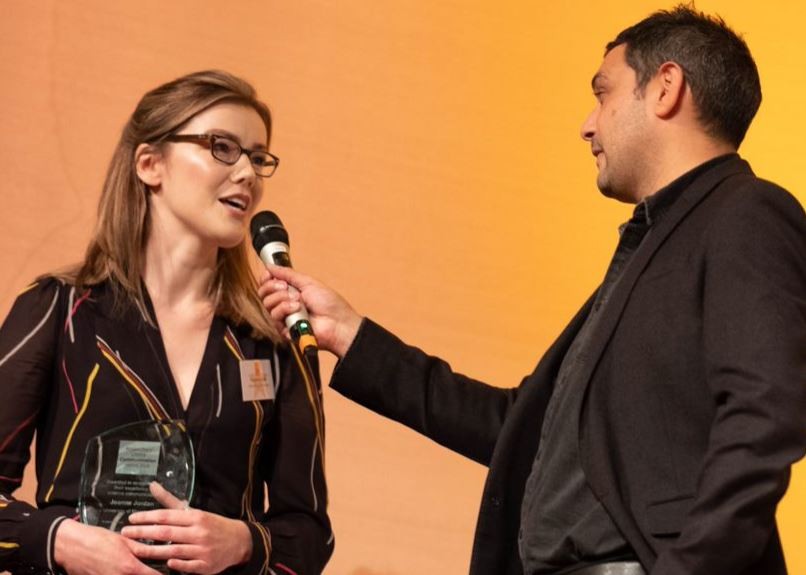 Manchester academic wins award for communicating research to the public

Dr Joanne Catherine Jordan has won a leading award which recognises how she has successfully communicated the purpose, meaning and impact of her research to the public.

She was presented with the Elsevier and the US-UK Fulbright Commission Researchers' Choice Communication Award at the Early Career Researchers UK Awards, at a ceremony attended by over 75 senior figures from government, academia and industry.

Dr Jordan, an Honorary Research Fellow at The University of Manchester's Global Development Institute, has investigated the impact of climate change on the lives of low-income people in Dhaka, Bangladesh.

Her project ‘The Lived Experience of Climate Change’ engaged residents of an informal settlement in the research findings, and built awareness and action on their everyday accounts of living with climate change through an interactive theatre performance.

Subsequent theatre performances, documentary films, educational programmes, and public events were then used to engage a much wider set of international and national audiences. Joanne has brought her work to over 235,000 people including study participants, policy makers, practitioners, academics, students and the general public.

Dr Jordan has won multiple awards for the project - it won an Arts and Humanities Research Council’s Research in Film Award, a University of Manchester Making a Difference Award, and it was also a finalist in a national public engagement competition run by the National Co-coordinating Centre for Public Engagement.

Winning this award is a huge honour, but far more importantly, it provides recognition of the importance of working with those that will be impacted the most by climate change to ensure that their stories are heard, and that people are better informed of their needs and priorities.

"Dr Jordan's project is fully immersive", said broadcaster Dr Adam Rutherford, lead judge and presenter of the awards. "The resulting work has the potential to influence other people, and hopefully policy makers. It's a great example of scientific engagement that reaches diverse publics and has a genuine impact on viewers."

For further information on the project, visit https://bit.ly/GDIpotgan or search #GDIpotgan on Twitter.

Manchester academic wins award for communicating research to the public