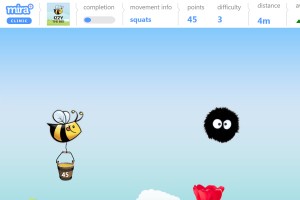 A team from Central Manchester University Hospitals NHS Foundation Trust (CMFT) and The University of Manchester has developed new computer games in collaboration with MIRA Rehab Limited and tested by Pennine Care NHS Foundation Trust’s Falls Prevention Team and its patients, designed to significantly reduce the likelihood of falls at home and in the community among older people.

One third of people over 65 will suffer a fall, and this rate rises to one half of people over the age of 85. Falls frequently lead to severe injuries that result in the need to live in care homes and can even be fatal. The issue is expected to have an ever increasing impact as the UK’s population ages and represents a significant cost to the NHS, at more than £2.3 billion every year.

Research has shown that engaging in certain physical exercises can prevent falls by at least 40%, but many older people find it difficult to maintain sufficient activity levels.

The Exergames run on MIRA Rehab’s MIRA software platform and are played using a Microsoft Kinect sensor to monitor body movements. They can be programmed by clinicians to be tailored to the individual’s levels of ability, taking into account fatigue, pain and fear of falling. The MIRA software, which includes activities such as squatting to control the movement of objects on a TV or computer screen, logs the duration of gameplay, how frequently it is used, and provides reports to clinicians on patients’ progression.

“We spoke to a lot of older people and physiotherapists before creating the games because it was really important that what we produced was easy to use and made keeping fit as fun as possible for the target audience,” Dr Emma Stanmore, Lecturer in Nursing at The University of Manchester, explained. “Many individuals over the age of 65 haven’t played computer games before, but those who have been helping us test the technology have given us very positive feedback.”

“Currently, our focus groups have been using the technology within Trafford Community Services but it’s a very cost-effective device for the NHS so we hope that if the Exergames are rolled out across the UK patients will be able to take it home and play it with their grandchildren,” Dr Jay Chillala, Consultant in Elderly Health at the Trafford Division of CMFT, added.

Debra Maloney, Trafford Intermediate Care Team Leader at Pennine Care NHS Foundation Trust, said: “Physiotherapists from our outpatient rehabilitation team have been helping to develop Exergames by advising on the exercises included in the programme and some patients from one of our exercise groups have played a valuable role by giving feedback on demo versions of the games.

“It’s been fantastic to be part of a project that really is at the cutting edge of falls prevention and will make a huge difference to older people.”

The Exergames currently include three games and four exercises such as leg lifts and squats. The first phase of development and testing was funded by CMFT Charitable Funds for Innovation and The University of Manchester's Manchester Institute for Collaborative Research on Ageing (MICRA). The project was supported by Manchester Integrating Medicine & Innovative Technology (MIMIT) and Trustech.