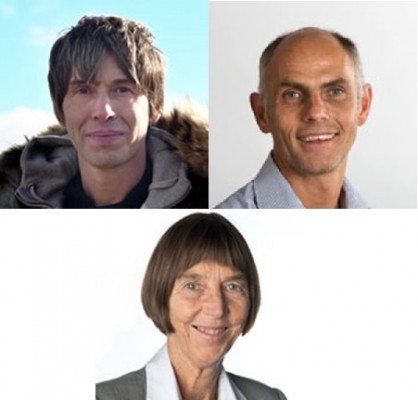 Three leading scientists linked to The University of Manchester have been elected as Fellows of the Royal Society, one of the highest accolades in science.

University of Manchester Professors Brian Cox and Phil Withers, and member of the University’s board of governors Professor Dame Sue Ion, will join the 47 other Fellows and 10 new Foreign Members announced today.

Particle physicist Professor Brian Cox is one of the UK’s most renowned science communicators, reaching audiences of many millions through his landmark TV shows.

Dame Sue Ion, is a world authority on nuclear power whose knowledge is sought by the Governments of the UK, USA and the European Union. She has been a member of The University of Manchester’s Board of Governors since 2004.

It is fantastic news to hear today that Brian, Phil and Sue have all been elected as fellows of the Royal Society, the premier UK science academy

Professor Dame Nancy Rothwell, President and Vice-Chancellor of The University of Manchester
„
Follow me on Twitter (opens in new window)

And materials scientist Phil Withers was awarded the Queen’s Anniversary Prize in 2014, recognising his ground-breaking work at the University’s X-ray Imaging facility. He is one of the leading exponents of advanced techniques to understand engineering natural materials in real time and in 3D.

The Fellowship of the Royal Society is made up of the most eminent scientists, engineers and technologists from or living and working in the UK and the Commonwealth. Past Fellows and Foreign Members have included Isaac Newton, Charles Darwin, Albert Einstein and Stephen Hawking.

New Fellows have been elected from across the UK, including Bristol, Durham, Newcastle, York and Glasgow, along with those from international institutions in Germany and the USA.

Professor Dame Nancy Rothwell, President and Vice-Chancellor of The University of Manchester said: "It is fantastic news to hear today that Brian, Phil and Sue have all been elected as fellows of the Royal Society, the premier UK science academy. This follows further great news that this week Professors Graeme Black and Judi Allen were elected Fellows of the Academy of Medical Sciences."

Venki Ramakrishnan, President of the Royal Society, said: “Science is a way of understanding both the world around us and ourselves. It is one of the great triumphs of human achievement and has contributed hugely to our prosperity and health. Science will continue to play a crucial role as we tackle some of the great challenges of our time including food, energy, health and the environment.  The scientists elected to the Fellowship are leaders who have advanced their fields through their ground breaking work. We are delighted to welcome them to the Royal Society.”