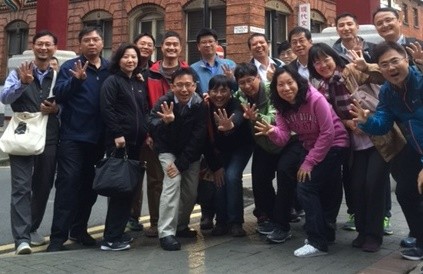 The next technological breakthroughs to power a new industrial revolution – dubbed Industry 4.0 – are being showcased to a delegation of Taiwanese experts as part of a fact-finding mission to the UK led by The University of Manchester.

The delegates are visiting Manchester – the birthplace of the first industrial revolution – for three weeks to learn more about the next big industrial development, known as Industry 4.0 or the ‘Industrial Internet of Things’.

Manchester is set to become a world leader as the UK’s first city to demonstrate the use of Internet of Things technologies at large scale.

Leading academics from a number of universities in Taiwan, brought together by National Formosa University, are on a three-week professional development course run by Manchester’s School of Mechanical, Aerospace and Civil Engineering with support from colleagues across the University – with a long-term aim to develop stronger research links between the UK and Taiwan in the area of Industry 4.0.

As part of their exciting programme the 30-strong Taiwanese delegation will attend a closing ceremony at the Etihad Stadium, with special guest speaker former-Manchester City player Francis Lee CBE and to hear from STATsports, a world-leading provider of GPS player tracking and analysis equipment, on how smart devices and wearable technology is influencing football.

Other highlights have been a visit to top UK car marque Jaguar Land Rover, digger giants JCB, the new Hermes distribution centre in Warrington and NR Engineering, a precision engineering manufacturer, to discuss the possibilities and impact that Industry 4.0 is having.

“Manchester is recognised as the birthplace of the first industrial revolution and the UK has maintained its pioneering reputation as we enter another phase of industrial development,” added Dr Diver, from Manchester’s School of Mechanical, Aerospace and Civil Engineering.

The University of Manchester is playing a key role with research in the areas of manufacturing, robotic systems, cybersecurity, big data, medicine 4.0, bio-manufacturing, UAVs, additive manufacturing, chemical engineering, project management and smart city solutions through the CityVerve project which highlights the multidisciplinary nature of Industry 4.0. We are therefore delighted to welcome this delegation from Taiwan as we establish stronger research links to fully explore the possibilities of Industry 4.0 and to ensure that society as a whole can benefit.

“We expect this is the first of many more courses on this topic, the delegates have also experienced the wonderful cultural sights in and around Manchester.”