Last month a team of UoM students took part in the UK National Qualifying Rounds for the Philip C Jessup International Law Moot Court Competition — the largest moot of its kind in the world — achieving fantastic results against tough competition. 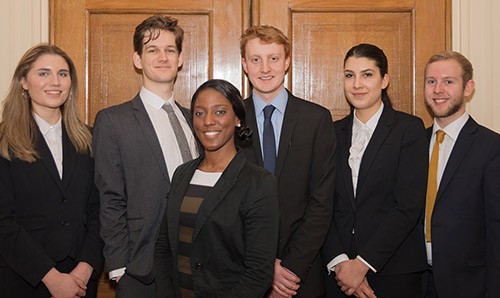 Having been selected in October, our team — MA students Dora Bumber, Danielle Reeder, and Mollie Wright and LLM students Daniel Bramhall and Niall Robinson — researched and produced written and oral submissions on complex issues of nuclear disarmament, the use of force, and the law of the sea. Each team member has put in long (extra-curricular) hours to reach this level and they are all a credit to the School of Law and the Manchester International Law Centre's Master's programmes.

The UK National Rounds were held on 23–25 February at Gray's Inn, London, where the team were pitted against Keele, Cambridge, Nottingham, and eventual competition champions King's College. Winning three rounds on the basis of very strong written memorial scores, the team put in an admirable performance in London, beating Keele by a clear margin and achieving very close scores against Cambridge and Nottingham. Our team faced tough questioning in every round from top class international law experts, both practitioners and academics, and were praised throughout the weekend for their abilities in responding.

This unique, challenging, and valuable experience was supported by the School and our Manchester International Law Centre, whose academic staff and postgraduate students provided valuable coaching.

We are very proud of the team's achievement and intend to build on their successes for next year's competition.