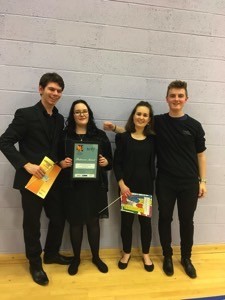 Manchester University Wind Orchestra (MUWO) set off in high spirits to take part in the regional National Concert Band Festival on 18 November – and returned with a much-coveted Platinum Award to add to the Gold and Silver Awards of previous years.

Under the batons of student conductors Katherine Stronham and James Gillett, the orchestra was boosted by no fewer than five percussionists.

They gave an animated rendition of Adrenaline City and A Silent Movie Suite, impressing the adjudicators with their stylish, fluid and confident playing and excellent coordination.

MUWO now look forward to performing in the next round in April.

Meanwhile, their local audience was treated to a replay of their winning performance, alongside Godzilla by University of Manchester composer Kevin Malone, at a full evening concert here in the Martin Harris Centre on 24 November.