Mapping The Genes of An Endangered Sea Creature
Newsroom

Mapping The Genes of An Endangered Sea Creature 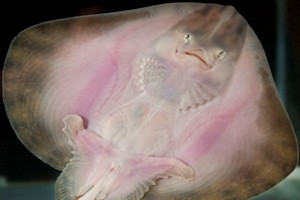 Scientists at The University of Manchester are attempting to map the genes of an endangered British sea creature to aid a captive breeding programme.

A team from the Faculty of Life Sciences is unraveling the genetic secrets of the undulate ray, a protected species in UK waters where its numbers have declined sharply.

Their data will be used to check the heritage of around 120 undulate rays in European aquariums, to draw up family trees and help pair up breeding adults to produce healthy offspring.

The team is looking at how diverse undulate ray DNA is – which gives an idea of how inbred an individual is. In a small breeding group inbreeding can result in frequent still-births and shorten the life-spans of offspring.

“This approach has never been used to aid captive breeding in sharks and rays before,” says evolutionary biologist Dr John Fitzpatrick, who is heading up the Manchester team.

“It is exciting for myself and my students to be working on a project with such a worthwhile practical application as well as strong scientific value.”

Marine biologist Jean-Denis Hibbitt at Weymouth Sea Life Centre, who has been managing the UK population since 2010, is now managing the European breeding and monitoring programme for the species.

There have already been 29 successful births at 10 different aquariums in the UK since the programme was launched, including at SeaLife Blackpool.

Dr Fitzpatrick estimates his team will have identified the genetic markers required to check for family relationships between the captive undulates within two years.

“The first objective of the breeding programme is to provide undulate rays for public display to help raise awareness of their plight,” said Jean-Denis.

“This added awareness and the ability for people to identify the species, will subsequently allow them to question whether illegally landed rays are on sale in their local fishmonger,” he added.

“If numbers in the wild fall to a critical level it is feasible we could help with a reintroduction programme.”

Jean-Denis has compiled a stud-book and travelled Europe micro-chipping the rays to make each individual’s details and history easier to check in the future.

Populations of undulate ray in the Channel and off Southern Ireland are at the northern edge of their range, which stretches down the East Atlantic to the Mediterranean.

The International Union for the Conservation of Nature reports that fishery catches in some areas fell by between 60 and 80-per-cent between 1988 and 2004.

Named after the distinctive wavy lines on their upper bodies, undulate rays live typically at depths of 50 to 200 metres.

Growing to over 85 cms in length, they feed on crustacea including crabs, and females lay distinctive leathery oblong eggs – called mermaid’s purses - in the summer. They can live for 20 years.

Commercial fishing is blamed for the dramatic decline of the species, and was banned in 2009.

“Many of those housed at Sea Life centres and other aquariums had changed homes on one or more occasions and details of each individual’s antecedence had become very murky,” said Jean-Denis.

“Their long lifespan has also meant that many rays have been at aquariums longer than many of their keepers! That’s why this collaboration with The University of Manchester could be invaluable.”

University of Manchester student Iulia Darolti has travelled the UK taking DNA swabs from all 45 undulate rays in British aquariums.

She and Jean-Denis also accompanied a sports fishing expedition and managed to swab two wild undulate rays for comparison before these were released.

“It has been a challenging assignment,” said Iulia. “To expose the rays to as little stress as possible we developed non-invasive sampling techniques that allowed us to collect DNA from the skin.

Travelling the country working with rays is something I never imagined myself doing, but it has been a very rewarding experience,” she added.

PhD student Graeme Fox has been doing much of the laboratory work and says: “We developed a set of genetic markers to help discover whether the rays are related or not. After screening the DNA, we were able to identify regions that were likely to be highly variable. That allowed us to give each ray a unique genetic signature, and this will enable us to determine whether they are brothers, sisters, parents, or distantly related to one another. Our hope is that this data will enable Sea Life to plan the optimum management strategy to secure the genetic health of this beautiful and sadly increasingly scarce species.”

Jean-Denis is also hopeful the DNA testing will ultimately be extended to the UK’s wild populations.

Undulate rays typically have a patchy distribution in the wild, especially in the English channel.

“If it is found that the shrinking population has led to localised inbreeding it would sound alarm bells for the future survival of an iconic species in our waters,” he said.