The Martin Harris Centre has hosted its annual summer musical performance with a difference, the Relaxed Performance singalong. 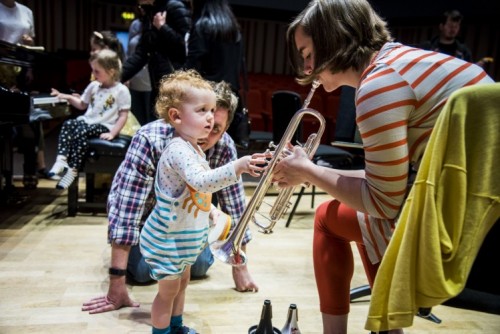 The Relaxed Performance is masterminded with inclusivity as a priority. Staged more informally than other events, the performance encourages those who might be put off from attending performances like these such as visitors with young children and babies, those with dementia and those who are differently-abled, and features family-friendly tunes such as ‘Let it Go’ from Frozen and ‘Consider Yourself’ from Oliver.

This year’s event took place on 7 June 2019 and was well attended by parents with young children, who were able to meet the musicians and get a closer look at their musical instrument, while youngsters were encouraged to join in with their own instruments, or clap hands and jangle keys to the music. Freedom to move around the Centre was allowed visitors to come and go as they wished, and to move around the space freely.

The artists who brought their talents to the Relaxed Performance are all students at the University of Manchester and are members of the Manchester University Music Society, participating in public performances throughout the year.

Visitors were vocal in their appreciation of the event, which was held as part of the Martin Harris Centre’s ongoing campaign to become a more accessible arts venue and part of the University’s wider social responsibility goals.