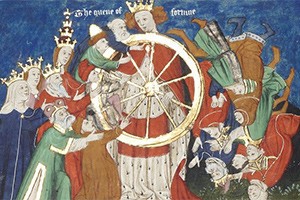 Whilst we’re unable to physically access our collections during this period of unprecedented self-isolation, work on our digital collections continues unabated.

A new digital collection, containing key works of Middle English literature, has been added to our Manchester Digital Collections platform, making them available to anyone online.

As well as being landmark literary texts, the items contain some wonderful illustrations, such as the delicate use of gold leaf on the “Wheel of Fortune” illumination shown here.

These incredible manuscripts will be of paramount importance to a wide variety of subject areas, including literature, history, theology, linguistics and art history.

The Middle English manuscripts housed at The John Rylands Library are a resource of international importance; probably the most significant collection of such material to be found outside the British Library and the Bodleian Library. These texts offer us a literal snapshot into the life, culture and language of medieval Britain.

The collection includes such works as the Canterbury Tales and John Lydgate‘s two major poems; the incredibly beautiful, richly illuminated Troy Book and a deluxe copy of Fall of Princes.

There are also several copies of the Brut chronicle the medieval history of England, ranging in date from the mid-14th century to the second half of the 15th.

Further notable works include numerous copies of the New Testament, translated into English by John Wycliffe the fourteenth-century radical and church reformer. Alongside these are other devotional texts meditating on the life of Christ and The Pricke of Conscience, a work traditionally attributed to the mystic Richard Rolle de Hampole.

Other interesting and unusual highlights include a multi-language legal commonplace book and medical texts such as On Urines, plus a rare late 14th-century copy of the Forme of Cury (‘proper method of cookery’), a recipe book compiled by the master cook of Richard II.

These items were initially digitised as part of a Jisc funded project called In the Bigynnyng.

You can view these items, along with other incredible collections, now via Manchester Digital Collections.