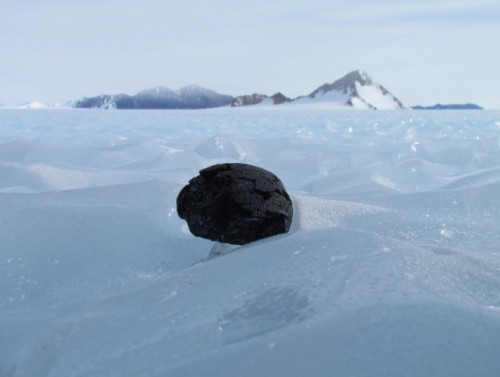 A hidden reserve of iron-rich meteorites which could hold secrets to the formation of the Solar System may be hidden beneath the surface of the Antarctic ice sheet, according to a study by a team from The University of Manchester.

Their paper, published in Nature Communications this week, suggests that these meteorites could be just 10-50cm from the surface, making their retrieval tantalisingly possible.

Although meteorites fall evenly across the Earth’s surface, over two thirds of the total number of collected meteorites has been recovered in Antarctica, partly due to the contrast between the white Antarctic surface and the dark meteorites resting on top. However, it is primarily because of ice flow dynamics, which transport and concentrate meteorites buried in the ice for hundreds of years up to localised regions at the surface known as Meteorite Stranding Zones (MSZs). This has enabled highly fruitful meteorite collection missions from the MSZ surfaces since the 1970s, which have provided colossal insights for planetary scientists, and yielded many Lunar and Martian meteorite samples.

However, far fewer iron-rich meteorites are found in Antarctica than anywhere else on Earth. The reason behind their scarcity has remained a mystery until now, but Dr Geoff Evatt and his team appear to have found the solution. They propose that the meteorites are missing as a result of the Sun’s rays penetrating the clear ice in MSZs and warming the iron-rich rocks more than non-metallic ones. Such warming melts the ice surrounding the meteorite, causing it to sink and offset all annual ice upwelling - this permanently traps the meteorites just below the surface.

The authors have combined laboratory experiments with mathematical models to show that typical thawing and freezing processes will cancel out the upward transportation of meteorites with high thermal conductivity (e.g. containing iron), allowing those with lower conductivities to emerge from the ice.

The filtering mechanism identified by The University of Manchester team indicates that sub-layers of ice, tens of centimetres beneath the surface of a MSZ, potentially contain iron-rich meteorites that have been kept in a preserved state for thousands of years. The accessing of this layer could significantly increase our knowledge of the early Solar System, as iron-rich meteorites invariably originate from deep inside large planetary bodies which subsequently broke apart.

With the strong possibility that a hidden reserve of meteorites lies just below the ice surface of localised areas of Antarctica, finding conclusive evidence of its existence is imperative to our understanding of the Solar System's formation. The challenge is now set: to be the first team to locate this reserve of meteorites and retrieve samples from it.