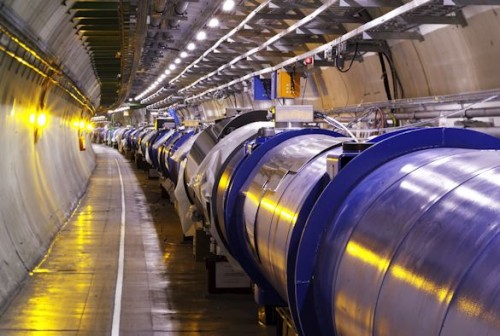 A new multi-million pound international project led by the University of Manchester and Lancaster University, who are both part of the Cockcroft Institute, has been launched to contribute to the upgrade of the Large Hadron Collider (LHC) at CERN in Geneva.

The collider will be upgraded to the High Luminosity LHC (HL-LHC) in the 2020s through a large international collaboration and the UK will make contributions in four areas through a £8M project HL-LHC-UK. The collaboration involves 7 UK institutes.

The project will deliver cutting-edge research and essential components over the next few years, enabling scientists to look for new, very rare fundamental particles, and to measure known particles like the Higgs boson with unprecedented accuracy. It will do this by enabling the machine to deliver more collisions per second, called luminosity. This is a key performance indicator of an accelerator, as it tells you the number of particles colliding in a certain amount of time.

Since discoveries in particle physics are based on collecting large amounts of data, then the greater the number of collisions and the more chance physicists have of seeing a new particle, probing physics below the world’s best collider sensitivity. The higher number of collisions also makes measurements of particle’s properties much more accurate, for example the properties of the Higgs Boson.

With this upgrade, the LHC will continue to push the limits of human knowledge, enabling physicists to explore beyond the Standard Model and Brout-Englert-Higgs mechanism. The project will help to increase the overall luminosity by a factor of 10, delivering 10 times more collisions than the LHC would do over the same period of time.

Upgrading the LHC will be a challenging procedure, and relies on several breakthrough technologies currently under development, and HL-LHC-UK will leverage the UK’s skills and knowledge to make important contributions.

“This research agreement UK-CERN for HL-LHC confirms the key role of the British Universities and Institutes in the project and in pursuing technology developments beyond present state-of-art", says Lucio Rossi, HL-LHC project leader at CERN.

This exciting project will mean the UK will develop and deliver cutting edge components to the High Luminosity LHC, leading directly to the broadening of the measurement and new physics discovery potential of the machine. This positions the UK as a key player in the high energy and high luminosity science discovery frontier.

Dr Rob Appleby, project spokesperson from The University of Manchester
„

“The LHC is one of the world’s largest engineering projects and its upgrade is a complex task involving many sub-systems and its upgrade will push the boundaries of particle accelerator technology,” says project manager Dr Graeme Burt, of Lancaster University’s Engineering department. “The UK will contribute to, and play a lead role, in many of the sub-systems in this project.”

The UK project will perform cutting-edge research and development and deliver hardware to the LHC upgrade in four areas. These are proton beam collimation to remove stray halo protons, the development and test of transverse deflecting (‘crab cavities’), new methods to diagnose the stored beams and sophisticated cold powering technology needed for the cryogenic systems.

The first is novel techniques to control stray, or halo, protons through sophisticated beam collimation, vital to the high intensity and high-energy operation needed to produce the luminosity. The second is the development and test of transverse deflecting cavities, known as crab cavities, required to rotate the colliding proton bunches to maximise the luminosity. The third is the development of novel beam diagnostics to measurement the beam properties and optimise the luminosity. The final area is the delivery of sophisticated cold powering cables, necessary for the complex cryogenic cooling of the upgraded LHC.

In the recently released open access book “The High Luminosity Large Hadron Collider. The New Machine for Illuminating the Mysteries of the Universe” (World Sci.-London), you can find out more about the High Luminosity LHC project, its technology and design as well as the challenges ahead.