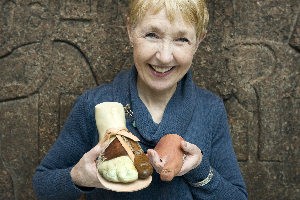 Two artificial big toes – one found attached to the foot of an ancient Egyptian mummy – may have been the world’s earliest functional prosthetic body parts, says the scientist who tested replicas on volunteers.

University of Manchester researcher, Dr Jacky Finch, has shown that a three-part wood and leather artefact housed in the Egyptian Museum in Cairo, along with a second one, the Greville Chester artificial toe on display in the British Museum, not only looked the part but also helped their toeless owners walk like Egyptians.

The toes date from before 600BC, predating what was hitherto thought to be the earliest known practical prosthesis – the Roman Capua Leg – by several hundred years.

Dr Finch, who is based in the University of Manchester’s KNH Centre for Biomedical Egyptology, recruited two volunteers whose right big toe had been lost in order to test exact replicas of the artificial toes in the Gait Laboratory at Salford University’s Centre for Rehabilitation and Human Performance Research.

Writing in the Lancet, Dr Finch said: “To be classed as true prosthetic devices any replacement must satisfy several criteria. The material must withstand bodily forces so that it does not snap or crack with use. Proportion is important and the appearance must be sufficiently lifelike as to be acceptable to both the wearer and those around them. The stump must also be kept clean, so it must be easy to take on and off. But most importantly it must assist walking.

She continued: “The big toe is thought to carry some 40% of the bodyweight and is responsible for forward propulsion, although those without it can adapt well. To accurately determine any level of function requires the application of gait analysis techniques involving integrated cameras and pressure devices placed along a walkway.”

The volunteers were asked to wear the toes with replica Egyptian sandals and, while neither design was expected to perform exactly like a real big toe, one of the volunteers was able to walk extremely well with both artificial toes. No significant elevation in pressure under the foot was recorded for either toe, although both volunteers said they found the Cairo toe particularly comfortable.

The Greville Chester toe – made from cartonnage, a sort of papier maché made using linen, glue and plaster – shows considerable signs of wear, while the Cairo toe has certain features, such as a simple hinge, a chamfered front edge and a flattened underside.

“The wear on the Greville Chester toe and the important design features on the Cairo toe led me to speculate that these toes were perhaps worn by their owners in life and not simply attached to the foot during mummification for religious or ritualistic reasons,” said Dr Finch.

“However, until we were able to test replicas of both toes using volunteers under laboratory conditions, it remained uncertain if they could indeed help their owners to walk.

“My findings strongly suggest that both of these designs were capable of functioning as replacements for the lost toe and so could indeed be classed as prosthetic devices. If that is the case then it would appear that the first glimmers of this branch of medicine should be firmly laid at the feet of the ancient Egyptians.”

The article, ‘The ancient origins of prosthetic medicine’ is published in the Lancet and is available on request.

Images of both artificial toes and Dr Jacky Finch holding the two replicas are available on request.