Three outstanding Composition PhD students and graduates from The University of Manchester’s Department of Music have received national and international acclaim in recent months. 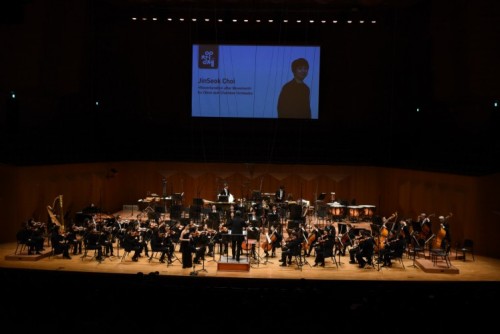 Third-year PhD student Jinsoek Choi won the Franz Josef Reinl Foundation Composition Contest in Austria for his trio for flute, viola and harp My Island Baby, the latest accolade awarded to Choi after he scooped the 2019 Kazimierz Serocki International Composer’s Competition in Poland for his work Pathos.

Choi’s Reverberations after Movement for oboe and chamber orchestra was performed in February 2020 by the Gyeonggi Philharmonic Orchestra under Narah Chung with soloist Minkyung Jeon at the 11th ARCO Contemporary Orchestra Music Festival in South Korea, and in May, his solo viola piece Space won the 15th Sun River Prize (2019) Students’ New Music Composition Competition in China.

Patrick Friel, also a third-year PhD, has been published by Edition Gravis of Berlin. His solo tuba piece Ezra’s Telescope has been performed in Argentina, Germany, Turkey, USA and UK, Lines, alive, and Views from Babel are all listed in the publication. Views from Babel, which is coming soon, was premiered in June 2019 by the Arditti String Quartet in the Bilkent Concert Hall, Ankara, Turkey.

Future publications of Friel’s will include a cappella choral piece Summons written for the Festino Chamber Choir who premiered it under Alexandra Makarova at the Russian Academy of Fine Arts Museum in St Petersburg in 2017. The piece won the Prize for New Music in 2018 at the Florilège Vocal de Tours and was performed at the Russian State Rimsky-Korsakov Museum in February 2020 as part of the  British-Russian Crossroads: Exchanges of Words and Music Conference in St Petersburg. His large-scale chamber work Waters, Spires, Skies was also a Discovering the Young Composers of Europe Prize-winner in 2019 and was performed in Oslo and internationally broadcast.

Next year, Friel’s Lament will be performed by by Ensemble Intercontemporain, for whom the pieces was commissioned.

Finally, Composition PhD graduate Joshua Brown, who completed his doctorate in 2018, was selected for the LPO’s Young Composers’ Scheme and has been working with the orchestra and project leader Sir James MacMillan over the past year. The culmination has been the composition of Morphogenesis, an eight-minute work inspired by Beethoven's Eroica Symphony and Alan Turing's research into the patterns within the evolution of cells.  The work has been recorded by the LPO and Foyle Future Firsts, conducted by James MacMillan, and will be released as a streamed online premiere in November 2020 as part of the LPO's online lockdown concert series.

Accolades abound for The University of Manchester’s musical talent and the department, which was named best in the country in the Sunday Times’ 2020 Good University Guide.