The world premiere of Philip Grange’s new violin concerto will take place at Bridgewater Hall next month, commissioned by the BBC and performed by the BBC Philharmonic. 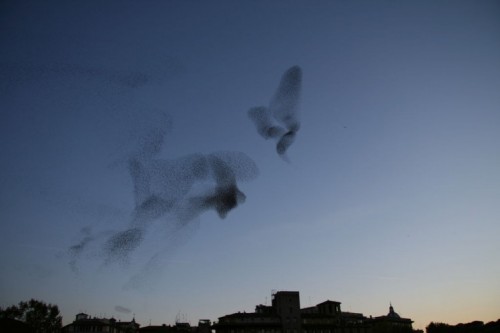 Professor of Composition at The University of Manchester’s Music Department in the School of Arts, Languages and Cultures, Philip has been hoping to see this piece take flight for the best part of a decade. He was about to go on research leave in 2017 to work on his upcoming opera when he heard the good news.

The concerto focuses on the notion of the individual and their place in relation to the mass and how groups behave.

“The mass has an animalistic side to it,” Philip explained. “I'm interested in the problem of how people behave in the context of this rise of mass.”

Inspired by collections of music inspired by swarms, and by the movement of murmurations of starlings and clouds of insects, the individual - represented by the violin soloist - moves both with the mass and outside of it, as if the soloist could be any one of the string section, symbolic of each one of us as members of the mass capable of singling ourselves out.

“It seems particularly pertinent in this current political climate where you get a lot of mass group behaviour, where people as part of the mass are behaving in a way that they might not as an individual, and I took that idea of how the individual deals with that in this piece,” Philip explained.

Germany’s celebrated violinist Carolin Widmann will be playing the violin solo, competing at times with the rest of the string instruments, while sometimes working with them, and other times soaring away from them.

The world premiere will take place on 2 November 2019 at The Bridgewater Hall in a BBC Philharmonic performance that includes Stravinsky’s Song of the Nightingale and Tchaikovsky’s Symphony No. 1. Tickets are available here.