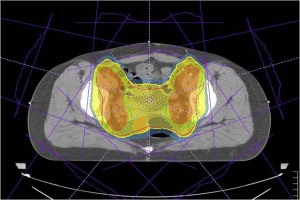 Scientists from The University of Manchester are leading a new European study to come up with methods to reduce the unwanted side-effects of radiotherapy and improve cancer treatment.

The research, funded by the European Union* and involving 13 institutions in the UK, France, Germany, Belgium, Italy, Spain, The Netherlands and the US, will identify ways to predict which breast, prostate and lung cancer patients are most likely to suffer long-term side effects.

These findings will then be used to design trials that test if cancer treatment can be tailored more specially to individuals so that the worse side effects of radiation – such as bowel or bladder incontinence can be avoided.

There are 17.8million people living in the European Union with a diagnosis of cancer and seven million of these people might receive radiotherapy - a treatment that involves the use of high-energy radiation to kill cancer cells.

In the long-term around 20% of those suffering with mild to severe side-effects – 1.4 million people – could benefit from the improvements the study brings.

Professor Catharine West, Professor of Radiation Biology at The University of Manchester’s Institute of Cancer Sciences who is leading the £5million study, said: “Long-term side-effects of radiotherapy impact on the quality-of-life of cancer survivors.

“Earlier work has identified clinical and biological predictors but more work and a better co-ordinated approach is needed to validate these findings so that they can be used in hospitals when treating patients.

“The study, known as REQUITE, aims to develop new clinical models and incorporate biomarkers to identify, before treatment, cancer patients at risk of side-effects. We can then use these models to design interventional trials aimed at reducing side-effects and improving quality of care in cancer survivors who undergo radiotherapy.”

The five-year study, which gets underway next month, is the first major grant won by members of the Radiogenomics Consortium, a collaboration set up in 2009 to work on projects identifying the common genetic variations that influence a cancer patient’s likelihood of developing side-effects from radiotherapy. REQUITE includes a four year observational study of cancer patients undergoing radiotherapy across Europe, US and in the UK, including The Christie NHS Foundation Trust. Patients will each give a blood sample, from which DNA will be extracted and genotyped to identify genetic variation. Scientists can then look at this variation in terms of the side effects experienced by the patient and use this information to confirm and/or improve current models that try to predict a patient’s response to radiotherapy. In the future this type of research could reduce side effects for all radiotherapy patients, improve quality of life and potentially increase the number of patients successfully treated for their cancer.

“Radiotherapy can damage healthy normal tissues which causes side-effects, most are short-lived getting better within a few days or weeks of treatment and might include sore skin, tiredness and hair loss but some can appear months to years following treatment.

“The side-effects can have a long-term impact on quality of life such as if people feel unable to leave their homes for fear of incontinence.”

Dr Susan Davidson will run the study at The Christie. Dr Davidson said: “The research will play a role in the long-term goal to make cancer treatment more personalised to individuals. This study should mean that in future doctors can look at a patient’s biomarkers by taking a blood test and design their treatment accordingly. We will begin recruiting patients to this study when it opens in April 2014.”

Professor West added: “This focus on personalised medicine is one of the key things the new Manchester Cancer Research Centre is working hard to do – bringing together a wide range of expertise to revolutionise cancer treatment. By collaborating with specialist partners in Europe and the US, this study we will be the largest of its kind and should provide the clearest picture yet about how different people respond to radiotherapy.”

Dr Talbot said: "I hope that the project will construct a statistical model, including biological marker data, to predict which patients with lung, breast or prostate cancers are at risk of serious adverse reactions to radiotherapy.

"This is an important area because as survival from cancer increases more people are living with side effects of treatment. Anything we can do to lower side effects by personalising the treatment to the individual has the potential to improve quality-of-life for cancer survivors.

"In future, cancer treatments will be optimised for each individual and their particular tumour, so that survival is optimised and side effects are minimised."

*The research is funded by the European Union’s Seventh Framework Programme. It will begin on 1 October 2013.

The Radiogenomics Consortium was established in November 2009. The scientific hypothesis underlying the development of the consortium is that a cancer patient's likelihood of developing toxicity to radiation therapy is influenced by common genetic variations, such as single nucleotide polymorphisms (SNPs).