New Publication: Justice for the Poor?

Rev. Dr Walter J. Houston has published a new book on social justice in the Old Testament named 'Justice for the Poor?'

Rev. Dr Walter J. Houston, an Honorary Research Fellow at the Centre for Biblical Studies, had his book published by Wipf and Stock.

Justice for the Poor? Social Justice in the Old Testament in Concept and Practice is a book of essays fro 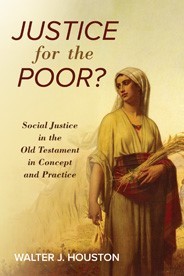 m Houston’s work over the last twenty-five years. It seeks to address a number of key questions: Can the Old Testament help us in keeping the excesses of capitalism in check? How can a book that goes on about “justice and righteousness”, but says “there will always be poor people in the land” and accepts slavery, have anything to say to us about social justice? Did Kings of Israel draft their subjects—and which subjects—for forced labour? What does it mean when the Psalms say God is coming to judge the world? Is charity justice?—or is justice more than charity? Does Genesis give us the right to use the earth and its creatures as we like?

The book is available from Wipf and Stock.