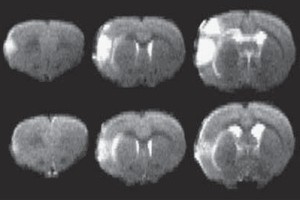 Scientists led by the President of The University of Manchester have demonstrated a drug which can dramatically limit the amount of brain damage in stroke patients.

Professor Dame Nancy Rothwell, Professor Stuart Allan and their team have spent the last 20 years investigating how to reduce damage to the brain following a stroke.

They have been testing the effectiveness of the drug Anakinra (IL-1Ra), which is already used for rheumatoid arthritis in experimental studies of stroke.

This new study builds on previous research, although the big difference is that rats with stroke risk factors such as obesity, insulin resistance and atherosclerosis were used alongside healthy rats and older ones. It means the findings have a far greater chance of being replicated in human stroke patients.

Researchers induced a stroke in the rats and the drug IL-1Ra, or a placebo for comparison, was injected under the skin. The researchers did not know which animals had been given which drug. This is a similar process to what happens in clinical trials of medicines.

The results were startling. MRI scans revealed that the rats that were given IL-1Ra up to three hours after the stroke had only about half the brain damage of the placebo group.

Professor Rothwell said: “This is the first time that we are aware of a potential new treatment for stroke being tested in animals with the same sort of diseases and risk factors that most patients have. The results are very promising and we hope to undertake further clinical studies in stroke patients soon.”

IL-1Ra works by blocking the naturally occurring protein interleukin 1. Researchers at The University of Manchester have identified that it is a key cause of brain injury following a stroke.

Interleukin 1 encourages inflammation in the area of the brain affected by stroke. This sends out signals to attract white blood cells and to switch on microglia cells in the brain. Because the barrier surrounding the brain has been weakened by the stroke the white blood cells find it easier to enter the brain. But instead of helping the inflamed area they actually kill nerve cells and worsen the injury.  The increasing presence of these cells also explains why the damage in the brain gets worse over time following a stroke.

IL-1Ra also reduces the amount of damage to the blood-brain barrier following a stroke so the harmful cells can’t enter the brain. In the recent experiments IL-1Ra reduced the damage to the blood-brain barrier by 55% in healthy rats and 45% in rats with underlying health conditions. In all types of rats the drug reduced the amount of activated microglia cells by 40% compared to the placebo group.

The only drug treatment currently available for stroke patients is Tissue Plasminogen Activator (tPA). However, this can only be administered to patients who suffer from a blood clot (ischaemic stroke) rather than bleeding. A brain scan is required to assess which type of stroke a patient has suffered which is why it is essential to get them to hospital as quickly as possible. tPA also has to be administered within a few hours of a stroke to be effective.

Professor Stuart Allan at The University of Manchester hopes that IL-1Ra could be used for both forms of stroke, meaning it could be administered immediately.

He said: “This drug has real potential to save lives and stop hundreds of thousands of people being seriously disabled by stroke. This really could be the treatment for stroke that we’ve been looking for over the past two decades.”

A phase 2 trial with a small number of patients has yielded encouraging results. It’s hoped a much larger clinical trial will demonstrate the effectiveness of IL-1Ra in reducing brain damage in stroke patients and that eventually it will become the standard treatment.

Stroke is the third most common cause of death and the leading cause of adult disability in the western world. More than 100,000 people have a stroke in the UK each year. Nearly a fifth of people still die within 30 days of diagnosis.  Those who survive are often seriously disabled.

The most common cause of stroke is ischaemia (blood clot causing damage) whilst 15% of strokes are due to primary haemorrhage (direct bleeding into the brain). The induced stroke used in this study was an ischaemia.

The animals were randomized for all the experiments, assessments were performed in a blinded manner and analysis was confirmed by two independent researchers.

The research from these experiments was published in the Journal of Cerebral Blood Flow and Metabolism on the 11 July 2012.

Professor Stuart Allan is available for interviews and images can be obtained from the press office.