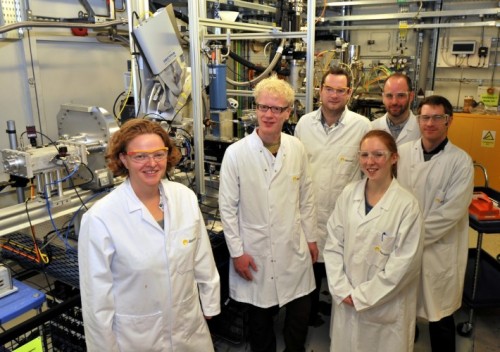 Researchers at The University of Manchester have discovered that an iron oxide mineral, hematite, reacts with radioactive neptunium to ‘lock it up’ within its structure. This could have profound implications for the environmental behaviour of the radioactive contaminant, as it may offer a new way to clean up areas contaminated with radioactive material.

Neptunium is a synthetic radioactive element which is generated as a by-product in conventional nuclear power reactors. It has a long half-life, meaning it will be around for millions of years, and it is potentially very mobile in the environment. The team worked with colleagues at Diamond Light Source, the UK’s national synchrotron light source, which harnesses the power of electrons to produce high-powered X-ray beams which can be used to study samples at the atomic level. There, they observed neptunium’s behaviour during the formation of iron oxides particles, and found that it formed chemical bonds within the mineral structure. This indicates that it could be strongly bound within the mineral over a long period of time, potentially immobilising this environmental contaminant. The final outcome could mean that neptunium is locked up in the mineral for the long term.

The team’s paper, published this month in the Environmental Science & Technology journal, is part of a large research proposal funded by the Natural Environment Research Council which looked at geological disposal of radioactive wastes. Their work has also been aided by the STFC Environmental Radioactivity Network, enabling the team to perform the first experiments at Diamond on this radioactive element.

With our colleagues based at Diamond Light Source, we worked hard to analyse the radioactive, neptunium containing samples. This paid off, as we confirmed for the first time that neptunium can be locked up in the structure of iron minerals. This offers fresh insights into its environmental behaviour and new pathways to lock up radioactive elements in contaminated waste streams and environmental systems.

Dr Katherine Morris (The University of Manchester), who executed the research
„

“Using Diamond Light Source to analyse neptunium is helping us to understand how processes occurring at the atom scale can determine the environmental behaviour of this radioactive element,” said Dr Sam Shaw, who worked with Dr Morris on the project.