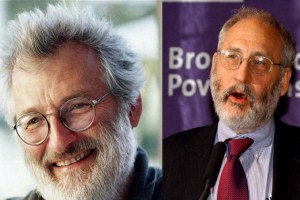 Professor Joseph E Stiglitz will join Professor Sir John Sulston at a public lecture following Friday’s launch of The University of Manchester’s Institute for Science, Ethics and Innovation where they will discuss the monopoly of scientific knowledge and economic power.

The 2001 and 2002 laureates will also attend the first meeting of 40 leading scientists and ethicists from across Britain - also today - to begin the process of formulating a ‘Manchester Manifesto’ which they hope will lay down a consensus on intellectual property in science. The Manchester Manifesto process will be completed in November this year.

Professor Sulston starts his role as the new Institute’s first Chair. Following the completion of a working draft of the human genome sequence in 2000, Sulston took on US scientist Craig Venter who tried to patent the most lucrative genes.

The British scientist famously kept his data in the public domain.

Professor Stiglitz, Chair of the University’s Brooks World Poverty Institute, will join him on Saturday for a day of discussions and lectures as well as a public lecture.

Stiglitz was Chief Economist and Senior Vice-President of the World Bank from 1997-2000 and also Chairman of the Council of Economic Advisers in the Clinton White House.

He is widely known for his critical stance on the privatization and liberalization policies pushed by the World Bank and the IMF, which led him to step down from his position in the World Bank in 2000.

Professor Sulston will work alongside the School of Law's Professor John Harris, a world-renowned authority on bioethics.

Professor Harris said: “We hope launch of the Institute and Manchester Manifesto process will stimulate a national conversation on the huge impact of new science and technology on society and the ethical dangers this represents - most notably intellectual property.

“As the frequency of ethical and regulatory dilemmas seems to be increasing, our task of observing and analysing the role and moral responsibilities of science and innovation is vital.

“So with that in mind, the Institute will examine the ways in which science is used in the 21st century, evaluate possible or desirable changes, and consider the forms of regulation and control of the process that are appropriate or required.”

Journalists are invited to attend the public lecture given by Professor Sulston and Professor Stiglitz on 5 July from 5pm to 7pm.
Venue:
University Place, Theatre A
University of Manchester
Oxford Road