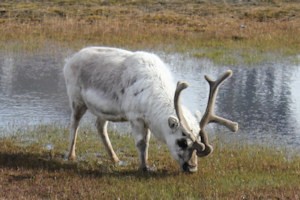 Instead the populations in the region are thriving because of rising temperatures according to a study undertaken by scientists from The University of Manchester and the Norwegian arctic university in Tromsø.

The research team found out that the numbers of Svalbard reindeer have increased by 30% in the last year. This year's result continues the trend which has been observed accurately over the last 36 years.

The scientists discovered this by counting the number of reindeer in the valley of Adventdalen in central Spitsbergen, part of a long term study of a reindeer population in Svalbard.

This is one of only a very few studies on animal populations and climate change that involves animals being physically counted annually rather than estimated.

The total number of reindeer (including all births and all deaths) in Adventdalen have been recorded annually since 1979 by a team led by Dr Nicholas Tyler of the Norwegian arctic university.

Dr Tyler said: “Winter warming is widely held to be a major threat to reindeer across the arctic but, in the high arctic archipelago of Svalbard global warming has had the opposite effect. Our data provides remarkable confirmation of this counter intuitive observation.”

This summer a team from The University of Manchester, led by Dr Jonathan Codd and Mr Nathan Thavarajah, assisted with the annual census of reindeer in Adventdalen.

Dr Codd, who is the programme director for zoology at the university, said: “The results revealed a remarkably successful year for Svalbard reindeer. Despite very high numbers in 2013, the population increased by almost 30% and reached a new record of just over 1300 animals, more than three times the population size in 1979 when the present series of counts began.”

The team found very little winter mortality and very high calving – there were over 300 calves in the valley which was the second highest number ever recorded.

“The substantial increase in the numbers of reindeer is linked with frequent and pronounced periods of warm weather last winter,” said Dr Codd. “In February the temperature rose above freezing for six days reaching a maximum of +4.2°c and the streets of the Norwegian settlement at Longyearbyen were reported awash with melt water.”

A selection of images are available on request.

Dr Jonathan Codd and Dr Nicolas Tyler are available for interview through the Media Relations Office.