Teodor Shanin, who was professor in the Department of Sociology from 1974 to 1999, died in Moscow on Tuesday, 4 February 2020 where he was President (previously Rector) of the Moscow School of Social and Economic Sciences (MSSES). 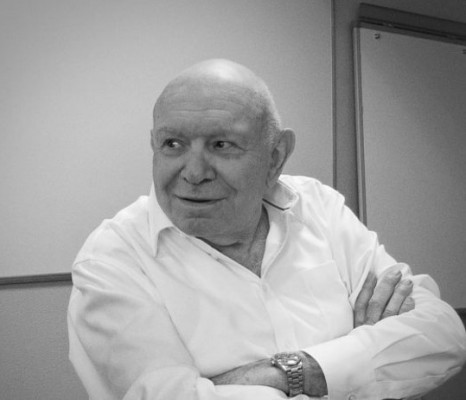 The Russian theorist Alexander Arkhangelsky wrote of him then as “a man of action while being at the same time the brightest intellectual”. In Berkeley Michael Burawoy described him as “thunder and lightning”. All this was exemplified in a remarkable life and an exceptional academic career. A large man with a shaven head and bright eyes, he stood out in appearance and demeanour in the conservative world of the university.

Teodor was born in Vilnius in 1930, then a Polish city with a large Jewish population and a strong intellectual tradition. There, he recalls a happy life until the war intervened leading to his exile in Siberia with his mother. The stories of his return to Poland and onward to Paris and then Israel in 1947 have become the stuff of legend. After a year in the Israeli army, he trained and then practiced very effectively as a social worker rising to a senior position while also studying for a BA in sociology and economics at the Hebrew University in Jerusalem.

In 1963 his life changed. He moved to the Centre for Russian and East European Studies at Birmingham University where he  registered for a PhD on the role of peasants in the Russian revolution. Soon after, in 1965, he was appointed to a lectureship in Sociology at Sheffield University then, after finishing his thesis, he moved to Haifa University as an associate professor in 1970, then a visiting fellowship at St Anthony’s College Oxford, before taking the chair at Manchester in 1974. In the previous three years he had published Peasants and Peasant Societies (1971) The Rules of the Game; Models of Contemporary Scholarly thought (1972) an edited collection of papers based on the theory workshop he had organised in Sheffield, and in the same year his major work The Awkward Class: Political Sociology of Peasanty in a Developing Society: Russia 1910-1925. It was this book that came to define him, followed as it was by his two-volume historical account of Russia - The Roots of Otherness (1985 and 1986); the second of which Russia 1905-7: Revolution as a Moment of Truth won him the Deutscher Memorial Prize.

These writings had a huge impact, challenging both orthodox Marxist and Modernisation theories which often saw the peasantry as the “disposable class” and an obstacle to social and economic progress. Building on ethnographic accounts of peasant life by Chayanov and others, his interpretation of agrarian societies differed fundamentally from structural accounts of “pre-capitalist modes of production” and others that derived from Marx’s metaphor of peasants as “sacks of potatoes”. In bringing the logic of peasant life to the foreground of discussion and with it the possibility of their engagement in cooperative and progressive strategies, Teodor challenged the ways in which agrarian societies were understood within the context of social change, opening the ground for accounts which placed them at the centre of revolt and revolution in the twentieth century. He argued that sociologists needed to incorporate the rural and the agrarian more centrally into their analyses. More particularly, in identifying Russia as “a developing country”, he engaged the interest of an audience beyond those with a particular interest in Eastern Europe. In Karl Marx and the Russian Road (1984) he opened up a critical assessment of determinist “stages” theory of historical development with significant implications for analysts and policy makers in the “third world”.

Teodor’s move to Manchester, joining Peter Worsley as the other established chair in Sociology, added to the Department’s strong base in development studies. There, his historical research in Russia was amplified by field visits to Iran, India and China and a lecture tour in Brazil. He was the driving force behind the establishment of The Journal of Peasant Studies and with graduate students from the South coming to work with him, he seemed placed on a clear course. However, with the rise of Mikhail Gorbachev to head of state in the USSR in 1988, things changed.

Teodor had maintained his links with radical academics in the USSR expelled to the University of Novosibirsk. One of them, Abel Aganbegyan, became Gorbochev’s senior economic advisor and he came to Manchester to discuss economic issues with colleagues and local leaders. At that time, Teodor had been made convenor of the “Transformation of Humanities” project in Moscow in 1988 and from this came a plan for annual three month Summer Schools in the UK for young Soviet sociologists. The first and the third of these (in 1988 and 1990) were based in the department. Drawing in sociologists from across the UK they were very successful, with many of the students returning to the UK to study for PhDs. Through his intensive lobbying, Teodor had obtained funding for these exceptional events, from the British Academy and also from the Open Society Foundation, and others. These Schools were the forerunners for a permanent Graduate School to be established in Moscow with degrees validated by The University of Manchester, and with Soros’ Open Society Foundation involved again.

Teodor’s focus had returned to Russia. With funding from the ESRC, The Leverhulme Trust and the MacArthur Foundation he initiated a series of ethnographic studies of rural life within the old USSR, to be published in Russian. When the MSSES opened in 1995 it was with Teodor (taking leave from Manchester) as its founding Rector and he became strongly identified with the School (commonly known as “Shaninska”) and its success. This led to the award of the OBE in 2002. It filled his life. Often when we would meet in London, I would put up my hand to interrupt him saying: “you are speaking Russian!” In 2003 we met, with his friend Laurie Knox – the old Faculty Secretary – in Vilnius. He had made clear that he wanted us to see the place where he was born. He was moved by the experience and it seemed then that his life was coming full circle. Having secured the continued validation of the MSSES programme and the link with The University of Manchester he felt able to stand down as Rector in 2007, taking on the ceremonial role of President. He endured Parkinson’s Disease with his customary energy and determination, continuing to speak at conferences around the world, enjoying the rediscovery of Chayanov in Toronto and Beijing.