Music composed by the University of Manchester Reader in Music Kevin Malone, inspired by grueling 18th century textile miller life, is being performed by the Orchestra of Opera North. 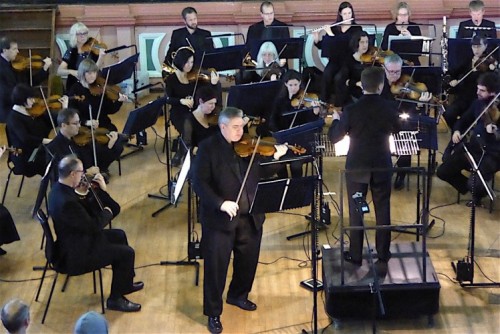 Conducted by Robert Guy and brought to life by violinist Andy Long across a diverse rollcall of venues including textile community halls and Bradford Cathedral - where the final performance will take place on 25 May 2019 - the music project is supported by Arts Council England, RVW and Ida Carroll Trusts, and the School of Arts, Languages and Cultures.

A new violin concerto tells the story of an 18th century child working in the textile mills called Robert Blincoe, whose memoirs inspired Charles Dickens’ Oliver Twist. Blincoe’s gruelling day is compressed into a 24-minute piece reflecting his bleak working conditions, as well as his hope for the future.

‘A Peterloo Parade’ is a ten-minute orchestral work celebrating the good-natured gathering of 70,000 textile mill workers at St Peter’s Square, Manchester, in August 1819, before the city council ordered the ensuing massacre of hundreds of the people. The music includes tunes known to have been performed and sung before the massacre and mashes them with chants from contemporary rallies the composer attended in the US and UK.

The third piece is an 18-minute electroacoustic work from Malone’s interviews with 13 textile workers from West Yorkshire. The piece is called ‘My Mill Life’ and is set against Andy Long's multi-tracked violin.

Malone’s work has won the praise of critics, describing the performance as: “Powerful contrasts, spiky tension, edgy harshness and at the end there is lyricism among the harshness as the boy sleeps and dreams."

Tickets to the final performance on 25 May at Bradford Cathedral are still available at adayinthelife.info.