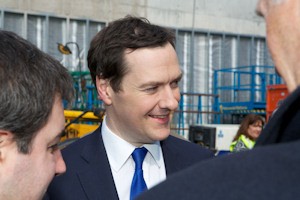 The University of Manchester will be home to a new national research and innovation centre in advanced materials, Chancellor George Osborne has announced today in his Autumn Statement.

The Sir Henry Royce Institute for Materials Research and Innovation will allow the UK to grow its world-leading research base in advanced-materials science, which is fundamental to all industrial sectors and the national economy.

The new Institute, supported by industrial partners, will have its £235m research centre in Manchester.  The Manchester centre will be supported by satellite centres or ‘spokes’ at the founding partners, comprising the universities of Sheffield, Leeds,  Liverpool, Cambridge, Oxford and Imperial College London.

The nuclear materials component of the centre, one of 14 such components, will be supported by facilities at the National Nuclear Laboratory in Cumbria and the Culham Centre for Fusion Energy. The founding partners’ facilities will be enhanced to a value of £132m.

Welcoming the announcement, the University of Manchester’s President and Vice-Chancellor, Professor Dame Nancy Rothwell, said: “This considerable investment in UK science – the largest single funding agreement in our University’s history – is testament to the outstanding research in advanced materials carried out in Manchester and at the new Institute’s partner organisations.”

Professor Colin Bailey, Vice-President and Dean of the University of Manchester’s Faculty of Engineering and Physical Sciences, said: “The UK has a world-leading research base in advanced materials, which is essential to the long-term wellbeing and growth of all industrial sectors.

“The new Institute, supported by our industrial and academic partners, will provide the opportunity for the UK to stay ahead in this vital area of research and innovation to ensure growth in the national economy, as well as addressing the many global challenges facing society.”

In his Autumn Statement, Chancellor George Osborne said: “A few months ago there were no proposals for major scientific institutions in the North of England. Today we commit a massive quarter of a billion pound investment in a new Sir Henry Royce Institute for advanced materials science in Manchester, with branches in Leeds, Liverpool and Sheffield.”

Manchester City Council Leader Sir Richard Leese said: “This is a momentous announcement for Manchester and the UK, which underlines the University of Manchester's world-class credentials and adds significant momentum to the city's major role at the leading edge of global advanced material research. It's something for which we have long campaigned. The potential for the applications of such materials is vast and they will play a major part in realising the economic potential of Manchester, Greater Manchester and the North as a whole.”

Aims of the Sir Henry Royce Institute for Materials Research and Innovation:

•    Underpin and provide growth to the entire UK manufacturing base and reduce the time to market from invention to application for new materials, with significant knock-on impact for the national economy

•    Invent and innovate new materials in various sectors covering fabricating, testing, analysing and demonstration, under different operating environments and provide the ‘missing link’ in the development of materials within the UK

•    Provide an international beacon for UK expertise and deliver national leadership and critical mass to allow identification of expertise within the UK.

•    Provide the required skills and training, allowing industrialists to work alongside academics, to produce the expertise of the future from apprentices to doctorates.