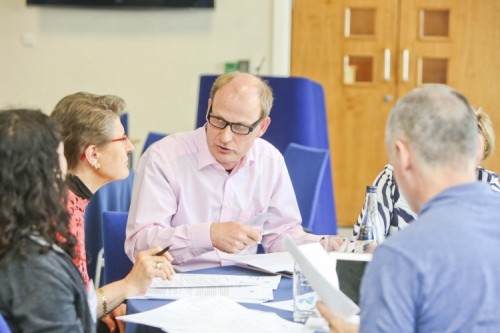 A new study has revealed a belief among pharmaceutical industry personnel that greater involvement of patients and the public could improve medicines research and development (R&D). The study, which is one of the first of its kind and part of the wider European Patients’ Academy (EUPATI) project, was published today in the BMJ Open.1

Patients have become increasingly involved in managing their own health over recent years. Although still an emerging area, patient involvement in medicines R&D – in which patients are actively involved in research projects and in research organisations – is most visible in public research environments (e.g. the UK’s National Institute for Health Research) and areas where existing treatment options are limited (e.g. rare diseases).

Researchers interviewed 21 pharmaceutical industry professionals, representing 11 companies, from the UK, Spain and Poland, with diverse professional roles including pan-European roles, about their attitudes regarding Public and Patient Involvement (PPI) in medicines R&D.

Most of the professionals had positive beliefs about PPI, and many were optimistic that greater involvement of patients and the public would contribute positively to the medicines R&D process. However, those in Spain and Poland expressed more uncertainty about the benefits and value of PPI than those in the UK or with pan-European roles.

The interviewees also highlighted potential barriers to further PPI activity within the sector, including a sense that the concept was too intangible at the moment to persuade industry leaders of its importance and benefits; that organisational codes of practice currently represent obstacles to PPI; and that it may be difficult to engage public and patients if they have negative views of the sector.

As a result of the study, the EUPATI project is discussing the potential for a new direction towards PPI in industry-led medicines R&D and has identified examples of patient/industry partnerships in this area.

We recommend the provision and wide communication of strong case studies to improve awareness of PPI and its benefits among industry professionals. To do this, we need to identify what constitutes good practice, as it is still a relatively new field

Suzanne Parsons, Health Researcher at the Public Programmes Team at Central Manchester University Hospitals NHS Foundation Trust (CMFT) and The University of Manchester, said: “We recommend the provision and wide communication of strong case studies to improve awareness of PPI and its benefits among industry professionals. To do this, we need to identify what constitutes good practice, as it is still a relatively new field.

“It would also be useful for industry to revisit codes of practice to ensure they do not serve as barriers against greater PPI activity.”

Key outputs of the project are the EUPATI Patient Expert Training Course and the EUPATI Toolbox for Medicines R&D to be launched later this month. These are for patients who are interested in learning more about the medicines R&D process and can help both patients and industry professionals implement patient involvement in medicines R&D, in order to address some of the aforementioned barriers to PPI identified in this study (i.e. patient education and industry regulatory worries).

“For different reasons, including cultural conservatism and concerns about regulatory barriers, industries have been somewhat reticent to engage directly with patients in clinical development. This approach is changing as we seek to understand and integrate patients’ views, and EUPATI is supporting patients with tools and knowledge for their meaningful involvement. Patients should be a partner in drug development, not just the subjects of studies,” explained Jane Griffiths, EMEA Company Group Chairman, Janssen Europe, Middle East & Africa.

The study was performed as part of EUPATI, a patient-led project, which involves a unique European team of academia, patient advocacy organisations and the pharmaceutical industry.