The theme of this year’s photography competition was ‘The Feeling of Home’, with the contest running from March to May 2022. 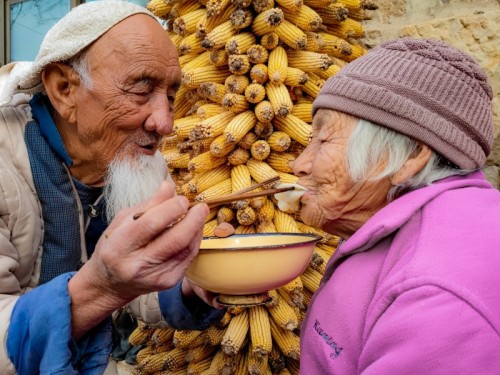 MANCHESTER 6 July 2022 – A tender moment between an older couple captured the hearts of voters for this year’s People’s Choice Award for the UK-China International Photography Competition.

After whittling down several hundred entries, the top 30 submissions were exhibited at The Alliance Manchester Business School from 30 May to 1 July 2022, with the two main winners from the UK and China already selected by the contest’s expert judging panel during the opening ceremony.

The People’s Choice Award left the selection up to the public, opening the votes both online and in-person at the exhibition. In total, almost 30,000 votes were cast through a combination of WeChat, Facebook, and the exhibit ballot box.

This third Award came with a prize of £500/¥4,500, and the clear winner was a fantastic submission from 王淑云 (Shuyun Wang). Her entry ‘The Older Couple’ (老来夫妻) depicted the affection still clearly visible between an elderly duo, as the husband spooned his wife the New Year treat of Tangyuan (sweet glutinous rice balls). The charming photograph was taken in rural Licheng County, Shanxi Province.

The MCI and Creative Manchester wish to congratulate all three winners once again on their wonderful entries.