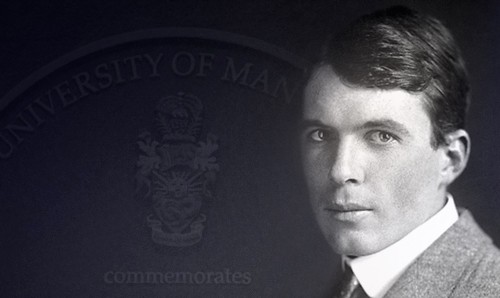 The University has unveiled a plaque in honour of Nobel laureate Sir Lawrence Bragg, 100 years to the day he should have received the Nobel Prize for Physics.

It wasn’t until September 1922 that Bragg was officially awarded the prize, due to World War I. Sir Lawrence and his father, Sir William Bragg, were jointly awarded the Nobel Prize in Physics for their analysis of crystal structure by means of X-rays. Aged 25 at the time, Bragg remains the youngest ever Nobel Laureate in physics.

This opened the way to the detailed study of the wave nature of X-rays and began the X-ray analysis of crystal structures that has since revealed the arrangement of the atoms in all kinds of substances from the chemical elements to viruses.

Sir Lawrence did that work before he came to Manchester, but he started at Manchester in 1919 as the Langworthy Chair.

During his time at the University and throughout his career, Sir Lawrence made an astonishing contribution to science. His legacy to our world lives on.

Professor Steve Watts, Head of the School of Physics and Astronomy
„
Follow me on Twitter (opens in new window)

The plaque was unveiled by William Heath, one of Sir Lawrence’s grandchildren, watched by several members of the family and University staff and students. It will be permanently placed on Coupland Street on the building that is now the Martin Harris Centre – previously part of the Physics department during Sir Lawrence’s time at the University

Professor Steve Watts, Head of the School of Physics and Astronomy, said: “During his time at the University and throughout his career, Sir Lawrence made an astonishing contribution to science. His legacy to our world lives on.

“But he was more than a great mind. He made a difference to many lives through his teaching, mentoring and support for research and his own recently published thoughts on his life and career reveal his other roles as a husband, father and friend.”