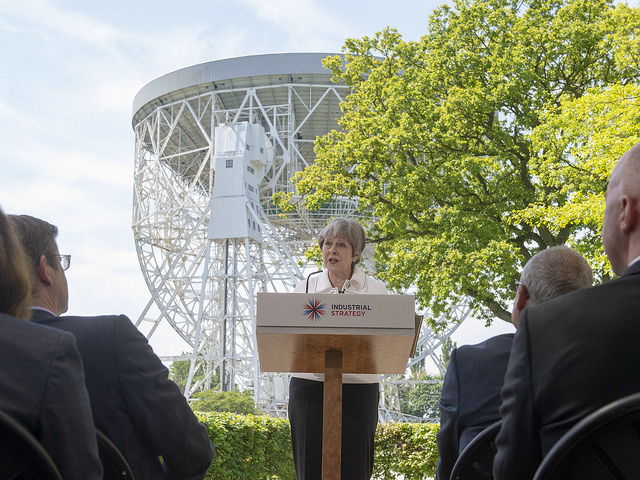 Today, (Monday 21 May), Prime Minister Theresa May visited The University of Manchester’s Jodrell Bank to deliver a major speech on science technology and to confirm funding for a spectacular new gallery at the world-famous site.

The Prime Minister visited a workshop involving children from the local Goostrey Community Primary School and met University of Manchester postgrad and postdoc researchers, before joining a meeting of the Council for Science and Technology (CST).

In her speech, delivered in front of the iconic Lovell Telescope, Mrs May unveiled four new missions as part of the Government’s Industrial Strategy, tackling subjects such as healthy ageing, zero-carbon vehicles, home energy efficiency and using AI to improve disease detection and prevention.

The speech came as The Heritage Lottery Fund (HLF) and the Department for Digital, Culture, Media and Sport (DCMS) announced that the Discovery Centre at Jodrell Bank is to receive a total of £16.1million for a transformational £20.5m project. £12.1m of the total is thanks to National Lottery players, with a further £4m coming from the Government.

The new ‘First Light at Jodrell Bank’ project will create a spectacular new gallery building that will promote and celebrate Jodrell Bank’s world-leading place in the history of astronomy, and a pioneering chapter in British scientific and cultural history.

READ MORE ABOUT THE FUNDING ANNOUNCEMENT