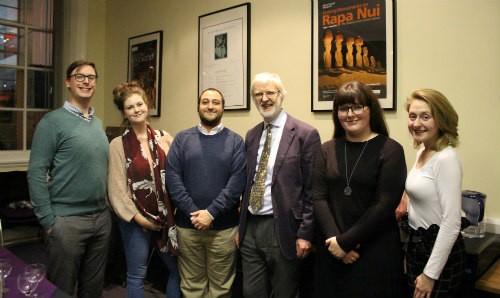 On 28 November members of the Centre for Biblical Studies were delighted to be among the audience for Prof Peter Oakes' Inaugural Lecture.

Prof Oakes' distinguished career brought him to the University of Manchester in 1997 and his enormous contribution has been recognised with his professorial appointment.

Prof Oakes is the first Professor of the New Testament at the University of Manchester, a fact which serves only to underscore his achievements.

The subject matter brought together several aspects of Prof Oakes' work, including patronage, economics and social structure in the New Testament, and the earliest Christian audiences of the text.

Prof Oakes argued that economics offers a route into understanding the New Testament as a set of texts written for non-elite audiences in the first-century Roman empire. He focused upon three texts in particular:

He also explained how Pompeian archaeological evidence helps us to think through aspects of the lives of first-century non-elite people and to gain some understanding of the implications for them of the range of New Testament ideas.

The lecture was well received, as was the vote of thanks offered by Emeritus Professor George Brooke to conclude the event!

Prof Oakes was joined by much of the audience at the subsequent reception.

Members of the Centre were delighted to congratulate Prof Oakes on his much-deserved achievement.