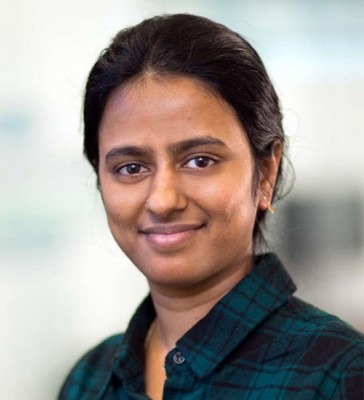 Professor Radha Boya of the Department of Physics and Astronomy has been named among the winners of the 2021 Philip Leverhulme Prizes.

Announced by the Leverhulme Trust, the prizes are worth a total of £3 million and are awarded to 30 outstanding researchers across the UK, chosen from over 400 nominations.

The Trust offers five prizes in each of the following subject areas: classics; earth sciences; physics; politics and international relations; psychology; visual and performing arts. Professor Boya has been recognised in physics, for her work on unravelling the properties of fluids under atomic-scale confinement, using angstrom-scale atomically smooth capillaries made from 2D materials.

Her research focuses on atomic-scale capillaries constructed out of 2D materials, such as graphene, hexagonal boron nitride, molybdenum disulfide and other layered crystals. Her team investigates properties of gas, liquids, ions and polymers, such as DNA in the ultra-confined 2D capillaries. They have demonstrated frictionless water and gas transport through these capillaries.

Professor Boya said: "I feel honoured being awarded the Philip Leverhulme Prize 2021 in Physics, and am quite excited to pursue a project on molecular transport with this award grant."

Now in its 20th year, the scheme commemorates the contribution to the work of the Trust made by Philip, Third Viscount Leverhulme and grandson of William Lever, the founder of the Trust. The prizes recognise and celebrate the achievement of exceptional researchers whose work has already attracted international recognition, and whose future careers are exceptionally promising.

Each prize is worth £100,000 and 30 are awarded annually. They may be used for any purpose that advances the prize winner's research.

I am delighted that we have been able to award these prestigious prizes to such a stunningly talented group of academics.

This round was more competitive than ever and the judges had an incredibly difficult task. This is evident from the achievements of the winners, who are working on a very diverse set of topics, from the physics of dark matter to climate science, from research into policing and inequality through to participatory art.