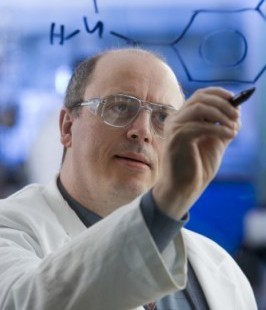 Professor David Leigh of the Department of Chemistry has been named a recipient of the highly prestigious Royal Society of Edinburgh (RSE) Royal Medal.

The coveted prize is awarded on the authority of Her Majesty The Queen; and Professor Leigh receives the medal for his work in scientific research, along with Professor Andrew Morris of the University of Edinburgh.

Professor Leigh is recognised for his pioneering work in methods to control molecular-level dynamics. His body of work on the synthesis of entwined and entangled molecular systems – such as threads, knots, and links – has been ground-breaking, and has enabled advancement of synthetic molecular machines (nanobots).

He said: "I'm delighted and humbled to be awarded a Royal Medal from the RSE. The list of past recipients of RSE Royal Medals reads like a roll call of the highest distinction in Scottish life, encompassing the sciences, arts, business and public service, and to have my name added to them now is an immense honour."

The RSE recognises excellence through awarding several medals – the most prestigious of which is the RSE Royal Medal.

The Royal Society of Edinburgh's medals recognise researchers and academics whose discoveries have helped us understand and change our perception of the world. Through a mixture of curiosity, determination and brilliance, their work not only makes a difference to society but continues to put research carried out in this country on the world map. I offer them all my wholehearted congratulations.